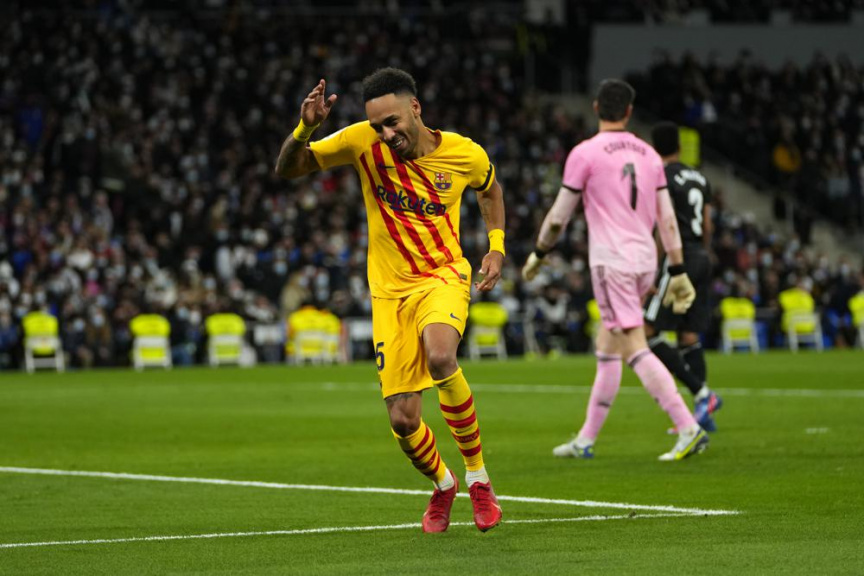 MADRID (AP) — Barcelona’s losing run against Real Madrid finally ended Sunday as the Catalan club enjoyed a stunning 4-0 win at the Santiago Bernabéu Stadium and showed its title hopes in the Spanish league may not be over yet.

Barcelona kept its recent momentum going under coach Xavi Hernández in the last “clásico” of the season. The win ended Barcelona’s five-match losing streak to its rival and maintained an outside chance of fighting for the title after a difficult start to its first season without Lionel Messi.

The victory was it's first against Madrid since 2019 and came in style — like a few others Barcelona enjoyed with Messi in his prime.

It was Pierre-Emerick Aubameyang who thrived this time, scoring twice to continue his great streak since being signed in the final minutes of the winter transfer window. Ronald Araujo and Ferran Torres added a goal each to give Barcelona its seventh win in the last eight matches in all competitions.

“Of course, we didn’t expect this scoreline, but we did everything we intended to do from the start,” Barcelona captain Sergio Busquets said. “Everything went our way and we could have scored even more goals.”

The result moved Barcelona within 12 points of league leader Madrid with nine rounds to go, and it could further cut the gap to nine points if it wins its game in hand against Rayo Vallecano.

“If we have a minimum chance, we will keep fighting,” Busquets said. “We know it’s going to be hard, but in soccer, anything can happen.”

Barcelona is level on points with fourth-place Atlético Madrid and is three points behind second-place Sevilla, which was held 0-0 at home against Real Sociedad earlier Sunday for its third straight draw in the league.

Madrid, which badly missed the injured Karim Benzema, was unbeaten in its last eight games in the league, with six wins. It had beaten its Catalan rival 2-1 at Camp Nou in their first league game last year.

“The result says it all,” Madrid defender Nacho Fernández said. “We played badly and they played well. Nothing worked for us. It was our first bad match this season. Maybe we were too relaxed because of our advantage in the standings.”

It was Madrid’s first home loss in 24 league games, since losing to Levante in January 2021.

Barcelona has been revitalized by Xavi and its attack has been red hot, outscoring opponents 24-5 in its last eight matches, with Aubameyang and Torres combining for 15 goals since arriving at the club this year.

Aubameyang has now scored nine goals in his 11 appearances since arriving from Arsenal.

He opened the scoring with a close-range header after a cross by Ousmane Dembélé in the 29th minute and sealed the victory with a nice flick over goalkeeper Thibaut Courtois in a breakaway in the 51st.

Araujo had added to the lead with a header off a corner kick in the 38th before Torres scored the third in the 47th after a clever flick-pass by Aubameyang as the Madrid defence collapsed yet again.

Barcelona had several other significant scoring opportunities throughout the match, with Aubameyang, Torres and Dembélé among those missing good chances.

Benzema, the league’s top scorer with 22 goals, couldn’t play because of a left-leg injury sustained in the league match against Mallorca when he scored for the eighth time in five games in all competitions. The French striker had netted a hat trick in Madrid’s thrilling comeback win against Paris Saint-Germain last week in the Champions League at the Bernabéu.

Madrid coach Carlo Ancelotti did not replace Benzema with another striker, instead using Luka Modric in a false-nine position at the top of the attacking line along with Vinícius Júnior and Rodrygo. Madrid barely threatened, though, and Ancelotti had to change tactics in the second half by putting Mariano Díaz upfront, which also didn’t help much.

Barcelona has also secured a place in the quarterfinals of the Europa League. It hosts Sevilla in the league after the international break, while Madrid visits mid-table Celta Vigo.

Fifth-place Real Betis missed a chance to gain some ground after being held to a 0-0 draw at Celta. Manual Pellegrini’s team stayed four points behind Barcelona and Atlético, and two points ahead of Real Sociedad in a tight fight for the Champions League places.

Villarreal stayed three points behind Betis after a 1-0 loss at Cádiz, which is just outside the relegation zone. Mallorca stayed a point behind Cádiz after losing 1-0 at Espanyol for its sixth consecutive defeat.

Pepe positive, ruled out of qualifier against Turkey