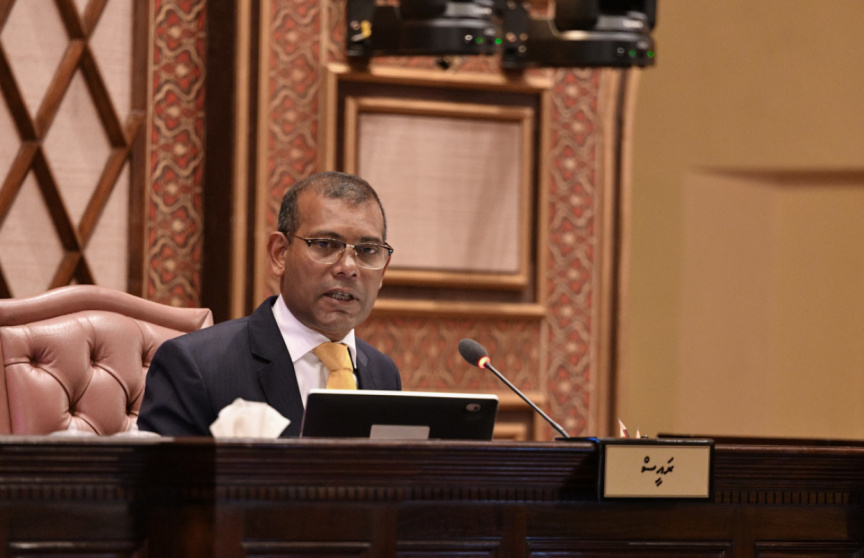 Parliament Speaker, President Mohamed Nasheed, on Wednesday, criticized the government for submitting bills which he said were archaic.

Nasheed, after initiating this Wednesday morning’s sitting, announced that the government had withdrawn the long awaited Mental Health Bill because it required revisions.

He went on to express displeasure over other government bills.

Nasheed said the government had presented 56 bills simultaneously when the current session began earlier this February. He said that the bills were archaic, and had been drafted long back, as excuses to ward of external pressures.

“…By the Maldivian government due to pressure from foreign countries. These [bills] were the many work initiated by different government institutions with the intention of creating excuses to say - Please! We will find experts and draft a bill regarding that. This is what we got,” said Nasheed.

He said that it had been those bills which the current government had presented to the Parliament, and that they comprised of little else but “excuses”.

“So, for the honorable members to accept these justifications… The Maldivian people, today, don’t want excuses. They want action. The bills submitted by the government do not, in any way, fall in line with the manifesto of Maldivian Democratic Party,” said Nasheed.

Nasheed said the youth were right to be concerned about the government submitting such archaic bills, and that the Parliament would try to revise such bills so it worked “in symphony with the heartbeat of the people”.