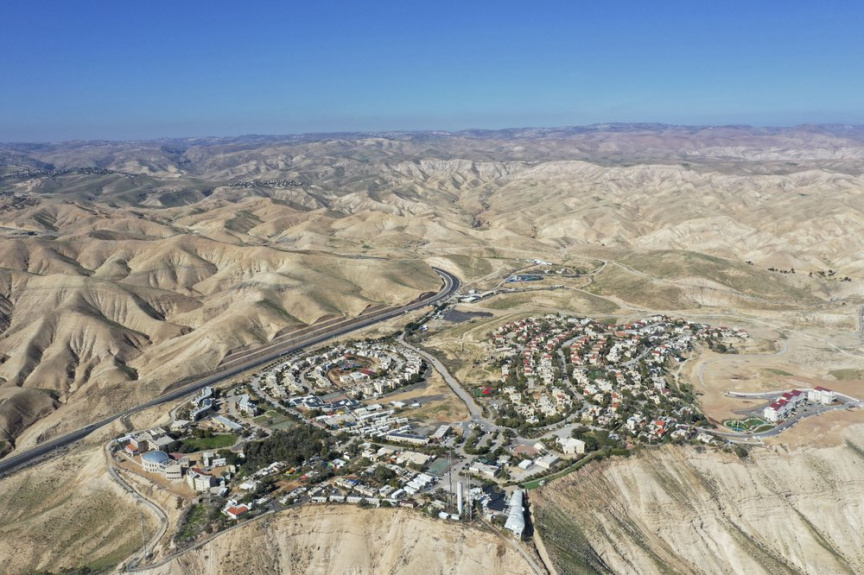 FILE - This Jan. 26, 2020, file photo, shows a view of the West Bank Jewish settlement of Mitzpe Yeriho. The United Nations Human Rights Council released a list of more than 100 companies it says are operating in Israel's West Bank settlements. In a report Wednesday, Feb. 12, 2020, the council said the companies' activities “"raised particular human rights concerns.” The list is dominated by Israeli companies, but it also lists a number of international firms. (AP Photo/Oded Balilty, File)

JERUSALEM (AP) — The U.N. human rights office on Wednesday released a list of more than 100 companies it said are complicit in violating Palestinian human rights by operating in Israeli settlements in the occupied West Bank — a first-ever international attempt to name and shame businesses that has drawn fierce Israeli condemnation.

The list’s publication after repeated delays escalated a looming showdown between Israel and the international community over its more than half-century policy of building settlements in the West Bank. Emboldened by a new U.S. Mideast initiative, Israeli Prime Minister Benjamin Netanyahu has vowed to annex Israel’s more than 100 settlements, while the chief prosecutor of the International Criminal Court in The Hague has indicated she will soon launch a war-crimes investigation into settlement policies.

The list included well known global companies, among them Airbnb, Motorola and General Mills. Although the vast majority of the world considers settlements illegal, Wednesday’s report did not accuse the companies of violating international law. Instead, it appeared to be aimed at pressuring them by drawing negative attention to their ties to a much-maligned Israeli policy.

“I am conscious this issue has been, and will continue to be, highly contentious,” said Michelle Bachelet, the U.N. High Commissioner for Human Rights. “However, after an extensive and meticulous review process, we are satisfied this fact-based report reflects the serious consideration that has been given to this unprecedented and highly complex mandate.”

The Human Rights Council in 2016 instructed the U.N.’s human rights office to create a “database” of companies deemed to be linked to or supportive of the settlements. Beginning with a potential list of over 300 companies, it narrowed it down to 112 firms involved in practices that raised human rights concerns, such as settlement construction, security services, banking and equipment that was used to demolish Palestinian property.

The report does not call for sanctions or have any concrete impact on the companies. But Israeli officials accused the report of caving in to pressure from the grassroots Palestinian-led boycott movement against Israel and raised concerns the list could be used as the basis for boycotts and other economic pressure against the companies.

In a statement, Netanyahu called the rights council “unimportant.”

“Instead of the organization dealing with human rights, it only tries to disparage Israel. We strongly reject this contemptible effort,” he said.

Palestinian Foreign Minister Riad Malki hailed the list as a “victory for international law and for the diplomatic effort to dry up the sources of the colonial system represented by illegal settlement in the occupied Palestinian territory.”

In a reflection of how entrenched the settlements have become, the list is dominated by Israeli companies, including leading banks, construction companies, supermarkets and mobile phone operators.

But there also were international companies, including travel firms like Airbnb, Expedia, TripAdvisor, Booking.com and Opodo. Many offer vacation rentals in the settlements.

In a statement to The Associated Press, JC Bamford said it is “not involved in the activities referred to in this report” and should not have been included. The company’s products are offered through a local dealer, Comasco, that also appeared on the list.

Airbnb declined comment. The San Francisco company said in November 2018 that it was removing its listings in West Bank settlements. After some Israeli-American homeowners sued, the company reversed course and said it would donate all profits from the listings to humanitarian aid organizations.

Israel and the U.S. regularly accuse the Human Rights Council of anti-Israel bias, and the Trump administration withdrew the United States in 2018 — faulting the U.N. for accepting autocratic governments that the administration said have repeatedly violated human rights.

The rights council is made up of 47 governments, with countries like Libya, Venezuela and Somalia among its members. The overwhelming majority of resolutions passed by the council has focused on Israel and its treatment of Palestinians, and Israel is the only country in the world whose policies automatically face scrutiny at every council session.

For decades, the U.S. joined the rest of the international community in criticizing settlement construction. That began to change after President Donald Trump took office in 2017. Surrounded by advisers with close ties to the settlement movement, Trump took a more sympathetic line toward Israel and halted the automatic criticism of settlements of his predecessors.

In November, the U.S. said it did not consider settlements illegal. And last month, Trump unveiled a Mideast plan that would allow Israel to retain permanent control over large parts of the territory, including all of its settlements.

This warm U.S. embrace could cause trouble for Israel. Emboldened by the Trump plan, Netanyahu has vowed to soon annex the settlements — a step that International Criminal Court chief prosecutor Fatou Bensouda has warned against as she prepares her decision on whether to open a war crimes inquiry. Under U.S. pressure, Netanyahu has put off his annexation plans until after March 2 Israeli elections.

The Palestinians have rejected Trump’s plan, and other countries have expressed little support for it while remaining opposed to the settlements.

The rights council had never before requested such a list scrutinizing corporate activities. The report said its authors had communicated directly with the companies to allow them to defend themselves or say whether they had changed their practices. The report’s authors called on the council to set up “a group of independent experts” to update the database each year.

Human Rights Watch, a vocal critic of the settlements, applauded the report.

“The long-awaited release of the U.N. settlement business database should put all companies on notice: To do business with illegal settlements is to aid in the commission of war crimes,” said Bruno Stagno, HRW’s deputy executive director for advocacy.

But Israel’s allies accused the council of collaborating with the BDS movement — a grassroots Palestinian-led coalition that advocates boycotts, divestment and sanctions against Israel. The movement says it advocates nonviolent tactics to protest Israel’s treatment of the Palestinians. Israel and its allies say BDS has a deeper agenda of destroying the country and accuse it of anti-Semitism — a charge the movement strongly denies.

“The U.N. Office for the High Commissioner for Human Rights has officially decided to endorse anti-Semitic BDS by issuing a defamatory list of companies it claims are supposedly involved in ‘settlement activity,’” said Anne Herzberg, legal adviser for NGO Monitor, an Israeli advocacy group that is highly critical of the U.N.

But in a statement, the BDS movement called for action against the companies. “These companies must be held to account, including through strategic boycotts and divestment campaigns,” it said.

US troops clash with pro-government group in Syria