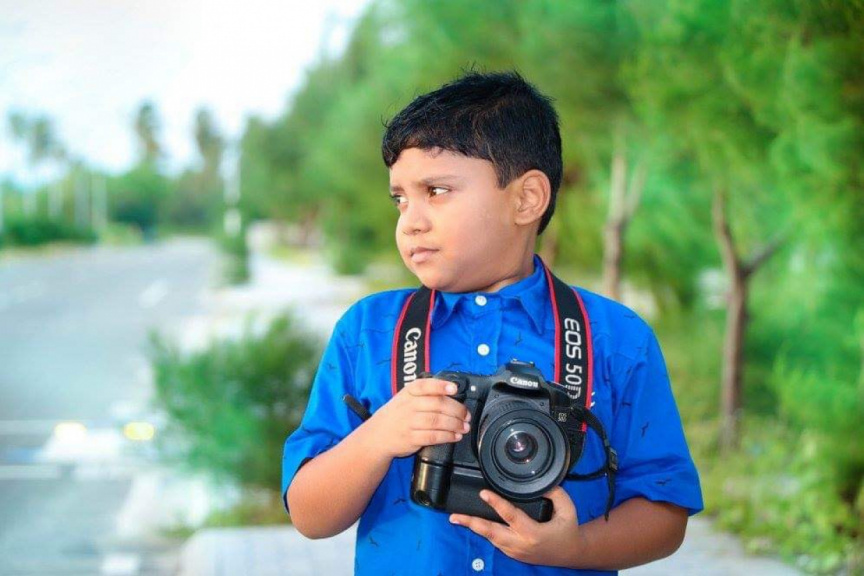 Photo shows Thaain Thamheen. Having learnt everything of the trade, including photo shoots, photo editing and printing, 10-year old Thaain Thamheen is now at the wheel of his father's photography business. (Photo/Thiththi Photo)

Born in G. A Villingili, Thaain Thamheen first ventured out into the world of photography at the age of just seven. Now, at ten years, he is a valued partner for his father in the business that has seen advances from the hard work of Thaain.

Having learned everything about the trade, including photoshoots, photo editing, and printing, Thaain is now at the helm of the business, after learning and following every step of his father.

“I went to take photos with dad when I was in grade 1 even. Soon, I learned how to take photos, dad would always teach me. After taking a photo, he would tell me that this would make it better. He would teach me what to improve.” said Thaain, describing how he entered the field.

Thaain is particularly fond of indoor photography due to the easy nature of the work. The last school holidays were spent by Thaain in his father’s studio, taking photos, where he spent most of the day.

“No customer has told me that my photos were bad. All I get are positive comments. Everyone says that my photos are very good, that is something that makes me very happy.” said Thaain.

Thaain’s father Thamheen Hassan, who served as the president of the Villingili council said that Thaain was a son he could be proud of and that the biggest help or his work comes from none other than his ten-year-old son.

“During the last holidays, it was Thaain who ran the studio. That was what he did all the time. His work is better and more satisfying than the person I hire. He is more careful with the equipment even.” said Thamheen, who now works in the neighboring island of G. A Kooddoo.

Even though his vacation days are over and schools have recommenced, Thaain still spends most of his free time at the studio.

His father said that Thaain would be with him and observing what he did even when he was little. This was when Thamheen began to notice the interest his son had and began to teach the craft to his son.

“It was because of the interest Thaain had, that he has gotten so far in the field. Now he will conduct huge outdoor shoots. I always take him with me now.” said Thamheen, gleaming about his only son.

Thaain, at just ten years old, already knows what he wants to do when he grows up. Despite his father’s wish to pursue photography as a hobby, Thaain has the mind to continue with it as a career.

Thamheen would of course, completely support this. “That will be up to Thaain to decide,” said Thamheen.