Contradictory versions, what is being hidden by Commissioner Munaz? 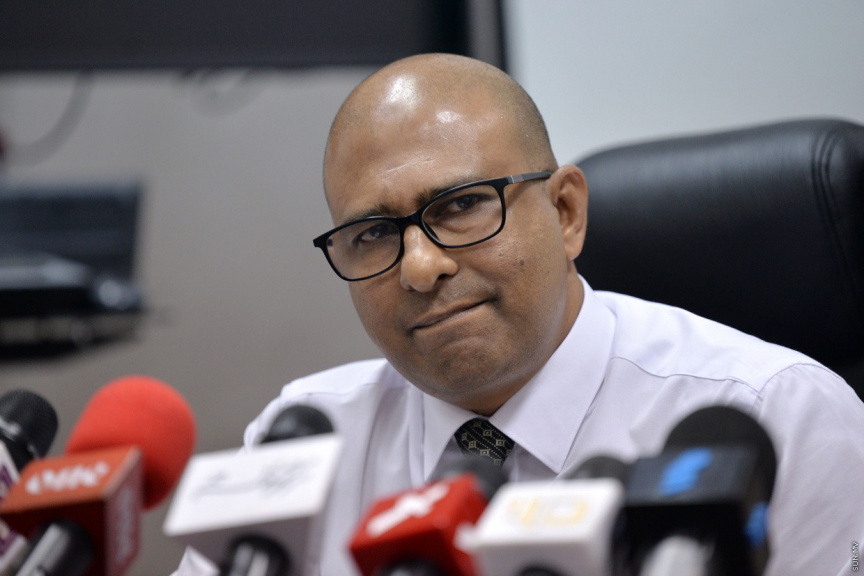 Commissioner of Prisons Abdulla Munaz is pictured at the first press conference held since being appointed to the post on in December 2018. (Sun Photo/Fayaz Moosa)

Commissioner of Prisons Abdulla Munaz is an elusive figure for the media and yesterday was the first time he met with media since his appointment on December 25, 2018.

Commissioner Munaz was forced to meet with the media after a spate of unrest hit prisons in the country on January 3, 2020. The Commissioner sat down at the press conference with a five-page document, and journalists and reporters were hopeful that this was a positive sign that Munaz would answer all the questions that journalists have been waiting patiently to ask him.

Munaz started the conference with a rehearsed script of shifting the blame of the condition of the prisons in the country to the former administration.

He expertly read out the measures taken by the current government in addressing the issues faced by prisons across the country and stated that the fault lay with the previous administration for not taking similar measures.

This was not something that journalists present at the conference took lightly since this is the first time the Commissioner had met with the press after more than a year in the post.

The post that Munaz is filling is not something to be taken lightly and requires an extreme level of responsibility. For this reason, journalists requested to change the one question policy.

The journalist that got the first question immediately went after the elephant in the room and asked about the contradictions in the version of facts presented by the relevant authorities and Commissioner Munaz.

The journalist also noted that what Commissioner Munaz was saying did not make sense and asked what the Commissioner was trying to hide.

Munaz stopped the journalist from asking a second question, and other journalists were forced to repeat the question after the Commissioner failed to provide an adequate answer to the question. The questions surrounded the version of the facts presented by Inspector of Corrections, Commissioner Munaz, and Police.

A statement by Corrections regarding the disorder that erupted in a prison in the country read that some Police officers had visited the prison to investigate a case of a remand prisoner who was attacked by other prisoners in the same cell. The statement was issued after a video was circulated that portrayed an inmate being “tortured” by Corrections 0fficers in the presence of the Commissioner and Police officers.

After the statement was released, Police stated that officers attended the prison for a meeting. The Corrections statement also read that no conflict had risen between inmates and Corrections Officers.

However, a tweet by the Inspector of Corrections read that Corrections Officers did, in fact, use force when they were obstructed from carrying out their duties.

When asked to explain this multiple times, Commissioner Munaz had only one answer. That no one had lied.

“They (Police) were there for a meeting. The unrest occurred when they were there and they went to the cell to investigate,” said Munaz.

What was evident from the Commissioner was that he was certainly intimidated by journalists and afraid of the questions that might come his way. The Commissioner had attended his first news conference with only information pertaining to the recent unrest in prisons. he was not prepared for any further questions.

He finally requested to keep the line of questioning to the unrests in prisons and nothing else. However, Journalists were not determined to let go of the opportunity and questioned the Commissioner regarding the issues noted in the audit reports of prisons.

The Commissioner once again replied that he did not come prepared for such a question and the press conference would be an extremely lengthy one if he got into that topic. He also noted that he might make a mistake by trying to answer a question without preparing for it.

“I will do something else. I know you have a lot of questions. So, each news agency will be provided answers separately by our media officials.” said Munaz, who was clearly trying to distract and take the focus away from questions.

Journalists quickly noted that as the Commissioner, it was not acceptable that he would attend a press conference unprepared for questions. The journalists also noted that some of the questions could not be answered by media officials.

“If the media officials cannot answer a question, they will clarify it with us and answer later on,” said Munaz.

Maybe the purpose behind Munaz’s one question policy was to decorate the headline of news agencies with what he wanted. When journalists did not back off, Munaz was forced to end the press conference with a promise to meet with the press more often.

Munaz did state that issues at prisons would be resolved using dialogue and not force before stating that inmates were now complying, after the unrest over the weekend.

However, a statement by the Human Rights Commission of the Maldives (HRCM) issued last night, has once again raised questions regarding Munaz’s version. The HRCM stated that it was only made aware of what was happening in prisons through media.

HRCM also stated that some prisoners were on a hunger strike and had even lit three areas of prisons on fire. This is starkly against the version of Corrections, who0 stated that prisoners lit fire to a bedsheet.

New questions are once again formulated for Commissioner Munaz. Why did Corrections provide false information to the HRCM? What are they trying to hide? Are the inmates truly complying? The unrest in prisons, is it over? Are you carrying out your duties accordingly?

While Munaz stated that he was going to resolve issues inside prisons with dialogue, he did not do the same with journalists. He wanted to restrict the questions of journalists and control them and answer only when he wished to do so. That is a massive misconception of the Commissioner to think that journalists would comply with his unreasonable one-quesiton policies.