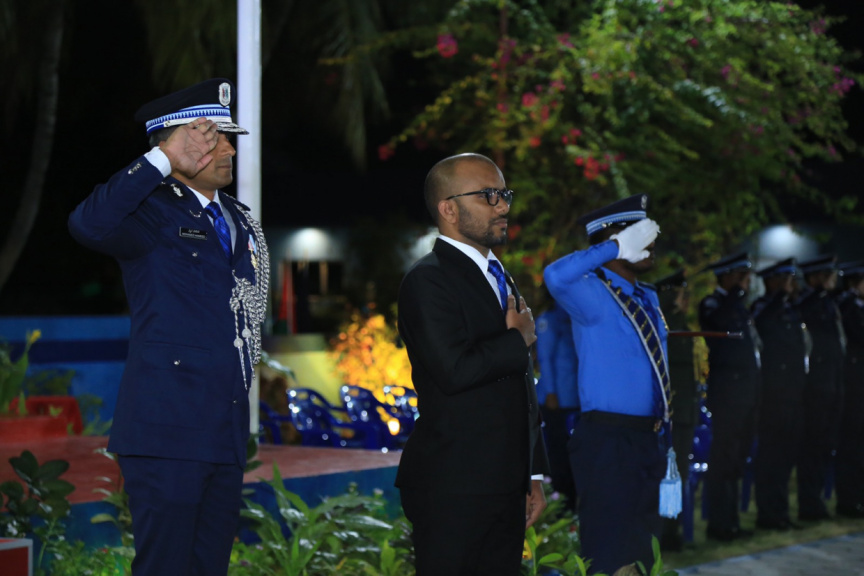 Finance Minister Ibrahim Ameer is pictured at the ceremony to commemorate the 31st Recruit Training Course of Police Officers held on January 8, 2020. (Photo/Police)

Finance Minister Ibrahim Ameer has stated that an estimated MVR 400 million was spent rehabilitation and for remand purposes by the state.

Speaking at the 31st Recruit Training Course of Police Officers, Minister Ameer stated that economic stability was the most important aspect of a country’s peace and prosperity, before noting that around 13,800 cases of domestic violence, robbery, and mugging, traffic accidents, check bounce, counterfeit and forgery, drugs and sexual abuse were reported to Police in 2019.

The Minister noted that a constructive survey of these statistics would show that the economic loss from these crimes would be higher than MVR 100 million. The Minister then noted that the government spent an estimated MVR 400 million on rehabilitating and remand purposes of prisoners.

“This is not a burden a small country with limited resources like ours can carry. The role of Police is important not just in finding out these crimes, but also to develop a mechanism to stop and deter these crimes,” said Minister Ameer.

How the safety and security of the country are viewed by visitors and the citizens of the country is one of the most important aspects of economic development, according to Minister Ameer. So an effective and democratic Police force to deter organized crime, corruption, and other obstructions to economic prosperity were a necessity, said the Minister.

“If we look at bigger countries throughout the world, it is evident that the economies of these countries develop extremely slowly if corruption has spread. This is why an effective Police force is needed. Corruption and crime can be stopped by effective policing.” said the Minister who emphasized on the role of Police.

“Research shows that there is a three percent difference in economic development in countries where the rule of law is established, and countries where it is not.” said the Minister.

He also noted that a stable economy can only be built if only there is a good system of governance, equality, rule of law and freedom for responsible democratic political movements as well as equality within the community. This was necessary in order to attract foreign investments, according to the Minister.

91 Police officers were awarded certificates at the ceremony to commemorate the graduates of the training course last night and the Minister reminded the officers the biggest responsibility on their shoulders was to uphold the value of the institution they represent.

The Minister’s speech ended by noting that the trust between Police and citizens needed to be increased to show that the country was a peaceful one, and this can be achieved through the hard work of the officers.

'It is not advisable to set minimum wage right now'

Some schools are still searching for teachers