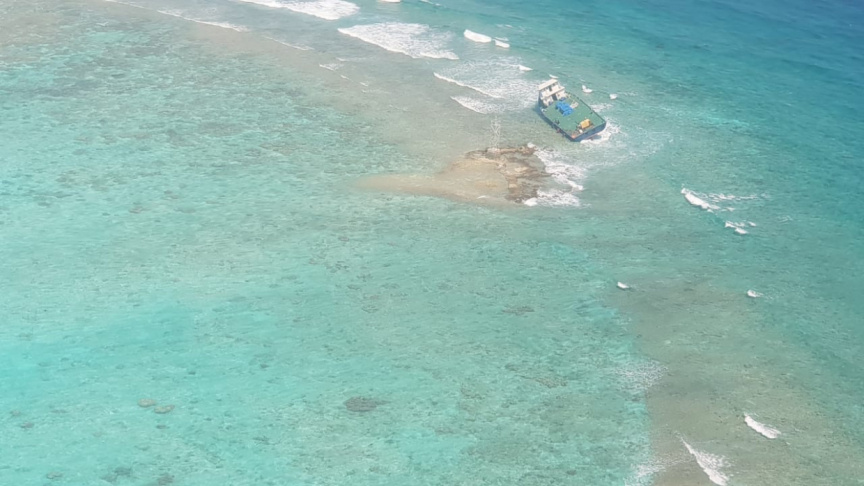 Photo shows a cargo boat ran aground onto a reef near K. Kagi on January 6, 2020. (Photo/MNDF)

Search efforts have commenced for a man who went missing from a cargo boat that ran aground onto a reef near K. Kagi.

Coastguard divers have begun diving in the area to find the man. So far, no sign of the man has been found, but shorts and a diving mask has been located from the area. Other than the divers, Coastguard vessel “FIC Velana” is also in the area to search for the man.

The incident happened early in the morning and involved a cargo boat named “TTS Fern”. There were three people on board when the boat ran on to a reef. Out of the three people, MNDF is searching for the missing captain of the boat, a 37-year old Maldivian from H. Dh. Kulhudhuffushi. Authorities received reports of the boat in distress around 8:09.

A similar incident occurred in B. Atoll last week. The incident involving a speedboat and a dinghy that collided near B. Dhonfanu saw a man named Nasrullah Abdulla from Musthareege, B. Eydhafushi thrown into the sea. No sign of him has so far been found. Search efforts are still underway. MNDF is conducting the search using helicopters, divers and a dive robot.

MACL: New runway at VIA to be in use by next quarter