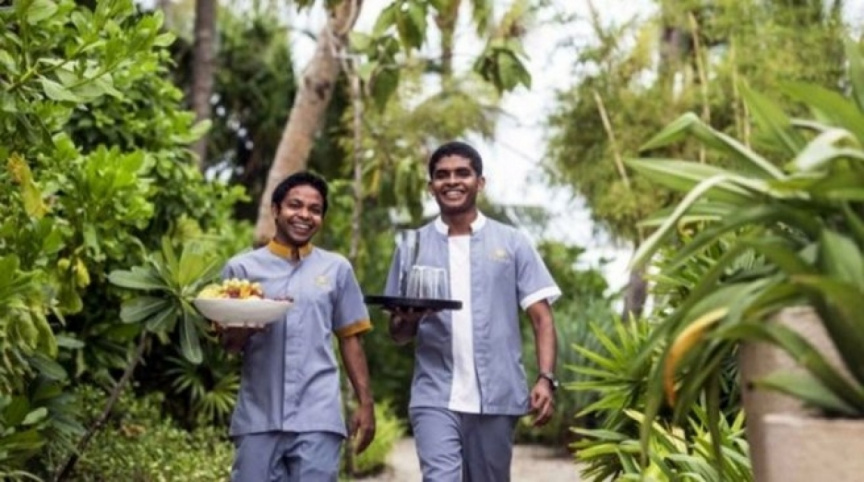 Employees of a resort in the Maldives are pictured at work. (Photo/Velaa Private Island)

Tourism Minister Ali Waheed has stated that he will protect and uphold the rights resort workers as well as investors of the industry.

At an event to welcome the first tourist to arrive in the Maldives in 2020, the Minister stated that the government would not be negligent in protecting the rights of resort employees. He also admitted that there were issues regarding how some resorts treated their employees.

The Minister stated that he had met with a former employee of Hondaafushi resort who was recently dismissed on controversial grounds and that he had promised to work on behalf of the employee to uphold his rights.

“I assure that the government will remain the same on obtaining the confidence of resort employees and their protection as much as it works to obtain investor confidence and protecting their interests.” said the Minister.

The Ministry will also soon meet with resorts from which the most issues were noticed upon an audit of the resorts by the Ministry in 2019. Action will also be taken against resorts that do not address these issues, said the Minister.

“We didn’t conduct an audit just for the sake of saying it. We have asked them (resorts) to resolve these issues. We will also see whether they are solved. I have previously stated in the “Burebi” event that regulations will be introduced and these issues would be resolved by May 1.” said the Minister.

The Minister had faced a backlash from the industry employees for comments made last week on service charges.

The Minister’s comments stating that the service charges earned by employees were adequate and proper, enarged the employees of the resort industry, who were quick to express their disapproval towards the Minister.

After reminding that he had apologized for the comments, Minister Ali Waheed stated that his intentions were not to say that resorts did not have problems. He reiterated that he had not said the rates of service charges were proper in all resorts.

“If there are any misunderstandings, I am here to clear them up.” said the Minister.