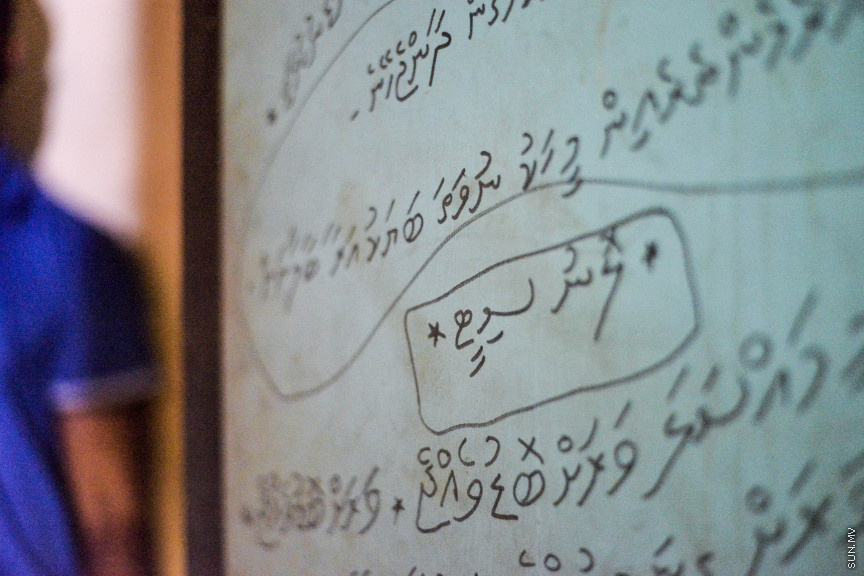 Police raided M. Lonumidhilige on December 19, 2019, as part of a crackdown on alleged drug dens run in Male' by drug networks. Lonumidhilige is thought to be one of the biggest such houses targeted by the authorities. (Sun photo/Mohamed Muzayyin Nazim)

“Do what you do and leave! It is is a huge request by us for everyone to leave as soon as they are done” read the instructions written on the interior walls of M. Lonumidhilige for the “customers” of the house.

Under a special operation commenced on December 5, to take down such “nests”, police allowed journalists inside M. Lonumidhilige, which has a long-running past in such illicit activities, after a raid that halted the operations in the house.

From how the house was arranged, it is very much evident that this was garrison for drug addicts to enjoy. It could be easily asserted that “all Services” related to drugs were available under one roof from this house with the highest level of security.

We walked through a narrow corridor inside the house at a normal pace, following the directions of police officers who were walking in front of us. On the right was a row of cabins resided by migrants, the lower level of M. Lonumidhilige.

We walked further inside and finally arrived at a large room that was air-conditioned and had two bunk beds. The center of the room was taken up by a large sofa. One wall was covered by a large wardrobe and the wall in front of the sofa was covered by a 42-inch flat-screen TV. An ashtray was left on a small table near the sofa. There was no indication that the ashtray was ever used and was cleaned extremely thoroughly.

The sofa in the room was occupied by four people, who seemingly did not have a single worry in the world. One was playing guitar, the other three had their eyes trained on us. They didn’t look like they were minors, and we only realized it when the officers with us asked us not to take photos of them. Police arrested the four on the sofa and seized around MVR 50,000 that was found from the wallet of one of them.

Head Superintendent of Police, Family and Child Protection Department (FCPD) stated that the minors were inside the house when officers raided. Authorities were unsure whether the four were residing in the house or just visiting. Four others were also arrested from the house.

The room next to the one where the minors were found was in dire condition. The word “Allah” was written in Arabic on the wall inside a drawn heart among other Arabic wordings. The fan on the ceiling was broken and there was no electricity. A milk can was left hanging on the window as a makeshift cigarette ash dispenser.

A fortress for drug addicts

The next part of the house was designated as a “café” for drug use. The garrison for users to enjoy that was named as “Lonu city”, translated as Salt city. The entrance was located at the end of the narrow corridor and was protected with a fingerprint lock system and steel bars.

The door could only be opened after “customers” ringed the bell and were permitted by those inside who would give “access” or when a designated code was entered. Police believe that the high security was to provide protection for those inside and buy time for an escape in case of a police raid.

Police entered the part of the house after destroying the lock on the barred door. There was no light when we entered and the only source of light was from the torch of the officer leading us. We climbed up the wooden steps and arrived at the first floor of the house after witnessing several accessories strewn all over the stairs that are usually used for drug abuse.

We arrived at two rooms at the end of the stairs. These two rooms, according to officers were not regular rooms but rather the “cafés” for drug users. Both rooms had a table surrounded by chairs.

The first room had a table that brought back memories of school desks and was surrounded by red and white plastic chairs. The chairs and tables had cigarette burn marks and were even melted in some parts.

On the table were a cigarette box, foils, chewing gum paper and a small pipe. Each foil had dark burns.  All of this indicated that the room was not new to such activity and was an everyday occurrence here.

Our gaze then went towards the orange-colored walls of the room that were filled with writings all over. We started to take a read and realized what we were reading were instructions and general rules for the use of the room. “Keep the place clean!”, “Don’t ask people for money!”, “Go down as soon as you are done!” were some of the instructions. Expletives and graffiti depicting foul material were also drawn on the wall.

We entered the next room and immediately, what was written on the wall grabbed our attention. Written in large size were the words “Lonu City”. The name associated with the house was the name that it was famous for and commonly used by criminals. Some of the instructions from the previous room were also noticed in this room.

“Warning! Everyone should leave as soon as they are done. Or one of us or a group of us will come up to check!” read the circled instructions on the wall.

“This problem has gotten big, very huge. We get complaints from a lot of people. Enough for us to notice the names of the people who do this. This is not a place to be occupied by two, three or four people acting as mats.” read a warning.

The room had a rusted cupboard that was being used as a table. Three chairs and a metal bed without a mattress was in the room. Cupboard doors were laid on the bed which was used as seats. The room had a small window which was covered by a cloth. The “table” in this room was also strewn with foils and pipes.

One of the many drug dens in Male’ city

A special operation by authorities commenced on December 5, saw raids on five different houses and the arrest of 37 people along with the seizure of drugs.

“The five houses all had a common setup. Each house had a high level of security at the front door that did not allow entry. These houses were designed so that drugs can be bought and used inside. The concept is (to operate) as houses providing services.” said Ahmed Shakir, superintendent of Police, Drug Enforcement Department.

“The operations were conducted to hold the owners of these houses or those renting the houses responsible and carry out criminal investigations, and take action against these people.” read a statement by Police regarding the raid.

All 37 arrested were found in the scene of the crimes, according to Shakir who also stated that there was a chance that some of them may be the owners or renters of the houses.

Shakir speculated that from the nature and wide way of how the criminal activities were run in these houses, the owners may be under the impression that they would not be held responsible for the operations run.

“The owners are also committing a crime and will also be held liable,” said Shakir.

Police have intel on other such houses and operations by the authorities will be continued to stop such crimes, according to Shakir. He also asked the public to cooperate and assist in such matters by reporting such residences.

Police are hellbent on uprooting the drug trade in the country and are not expected to step off on the operations.