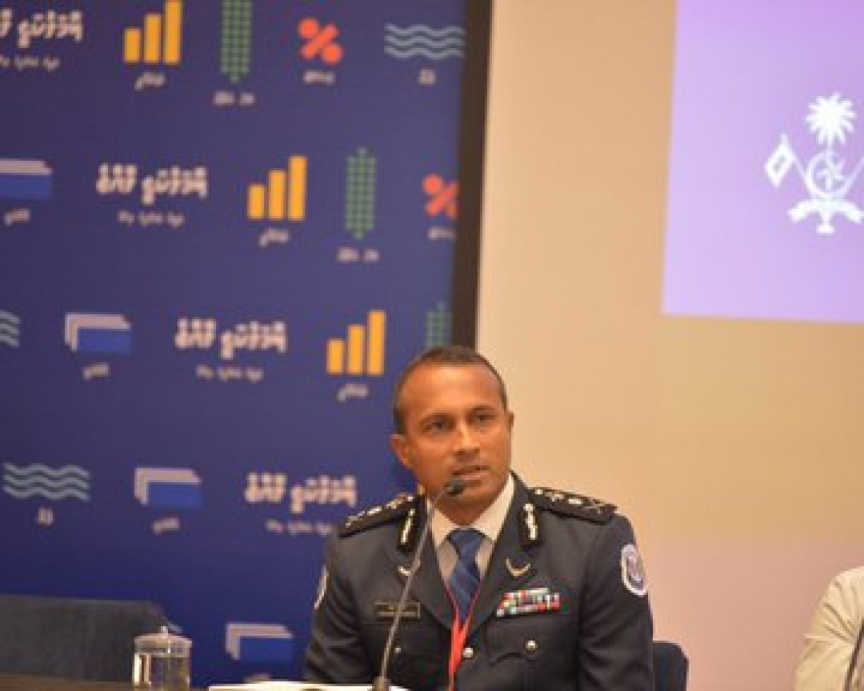 Commissioner of Police Mohamed Hameed is seen speaking at the "Viyavathi Raajje" conference in Crossroads Maldives on December 16, 2019. (Photo/President's Office)

An Afghan court has sentenced the wife of Ali Shafiu from H. Moonlightvalley after the two were arrested in Afghanistan for charges related to terrorism, Commission of Police Mohamed Hameed has announced.

It was reported by an Afghani news agency that a group of Maldivians belonging to the Islamic State group were arrested in Afghanistan on November 19. Shafiu was one of the people in the group who was arrested along with his wife and children. Local police have previously stated that Shafiu has been sentenced to 21 years in jail.

CP Hameed made the announcement regarding Shafiu’s wife today while speaking at the “Viyavathi Raajje” conference in Crossroads Maldives.

A statement by Police issued previously read that Shafiu and his wife traveled to Sri Lanka for medical purposes on June 23, 2018, after which they traveled to Pakistan in October. From there, the pair and their children entered into Afghanistan via Pakistan.

After the information was obtained by Police, joint investigations with foreign agencies showed that the family was in fact in Afghanistan and information regarding their arrest in Nangarhar Province was received through Interpol on November 11, 2019.

Information was also attained that Shafiu traveled to Afghanistan to join a branch of Islamic State in the country named as “Islamic State in Khorasan”. IS propaganda and video were also extracted from a digital device found on Shafiu’s possession after his arrest.

Senior figures of the network that recruited and sent Shafiu to Afghanistan had been identified according to Police, and the information has also now been shared with Afghani authorities. Shafiu is known to the authorities for his extremist ideology and the authorities were also aware that he had connections to others of similar ideology.

A previous attempt by Shafiu to travel to Turkey in 2015 with his previous wife and children were also intercepted by authorities on February 9, 2015.

According to the authorities, Shafiu had also been arrested in connection with a stash of weapons found near B. Hibalhidhoo in the aftermath of the bombing aboard the Presidential speedboat in 2015. He was charged with the possession and concealment of dangerous weapons but had to be released due to the lack of evidence on January 18, 2019.

No information regarding the couple’s four children has been revealed by the authorities so far.

The Commissioner revealed that 59 Maldivians were currently in Syria, out of which 91 percent were women and children. The government is also working to bring back the Maldivians in Syria who were requesting to return, according to the Commissioner.

Work to establish a center K. Himmafushi to rehabilitate those returning from Syria is also underway, according to the Commissioner, who also revealed that these people would be brought back within the next seven months.

Authorities foiled a 2017 ISIS plot to detonate an IED