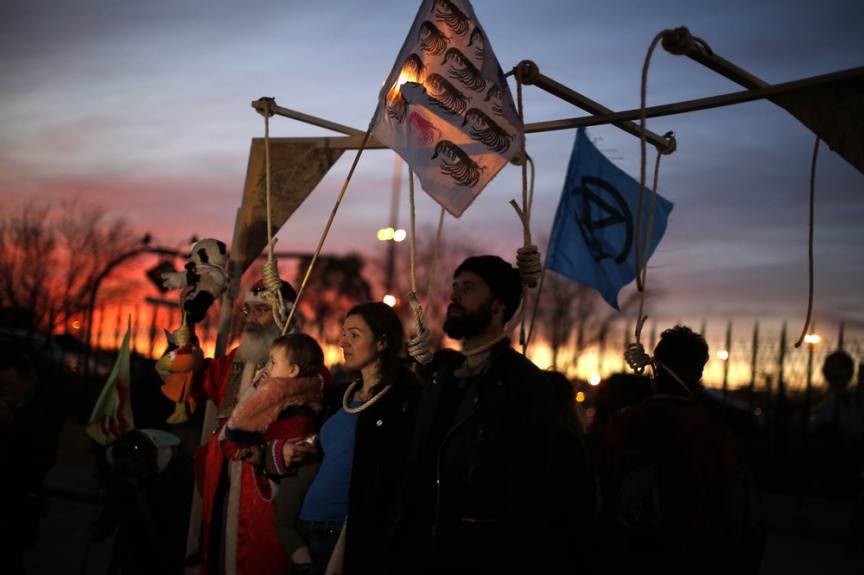 MADRID (AP) — U.N. climate talks in Madrid dragged into a second day of extra time Sunday, with officials from almost 200 countries unable to break the deadlock on key points of difference.

The chair of the meeting, Chilean Environment Minister Carolina Schmidt, told weary delegates to examine new agreements drafted by her team and meet at 1:30 a.m. (0030 GMT) for further talks.

“This has been very tough, very long,” she said as the talks entered their 14th day. Still, Schmidt said some progress had been made, adding that “things are coming together.”

Developing countries and environmental groups warned that the drafts circulated overnight Saturday risked undoing or stalling on commitments made in the 2015 Paris climate accord.

“I’ve been attending these climate negotiations since they first started in 1991, but never have I seen the almost total disconnection we’ve seen here ... in Madrid between what the science requires and the people of the world demand, and what the climate negotiators are delivering,” said Alden Meyer, a climate policy special at the Union of Concerned Scientists.

“The planet is on fire and our window of escape is getting harder and harder to reach the longer we fail to act,” Meyer said.

Among the main issues still being discussed in Madrid are rules for international carbon markets and a system for channeling money to help poor countries cope with the economic impact of climate change.

Nathaniel Keohane, of the Environmental Defense Fund, said it was critical for countries to resist attempts by Brazil and others to keep large piles of carbon credits amassed under a now-discredited system.

“That opens up a potentially major hole in the fabric of the Paris Agreement,” he said. “There is really a question of integrity at stake and it is really critical for countries to hold the line.”

Schmidt, the talks’ chair, told negotiators shortly after midnight that citizens around the world expected results to help tackle the “climate crisis” from the talks in the Spanish capital.

Growing concern about climate change has been reflected in mass protests staged around the world over the past year, often by young activists concerned about the future they and their children might face as the planet heats up.

Scientists have warned that emissions of planet-warming greenhouse gases need to start dropping sharply as soon as possible to prevent global temperatures rising more than 1.5 degrees Celsius (2.7 Fahrenheit) by the end of the century. So far, the world is on course for a 3- to 4-degree Celsius rise, with potentially dramatic consequences for many countries.

Demonstrations took place inside and outside the venue of the talks in the Spanish capital, with Swedish teenage activist Greta Thunberg one of the most prominent voices calling for urgent action to curb emissions.

Some countries said it was time to heed those demands.

“We have the science. We have the collective will to deliver enshrined in the Paris agreement. And now it is time to step up,” said Ola Elvestuen, Norway’s environment minister.

“A weak encouragement will not be understood by the outside world,” he said. “It will send a message that we are not listening to science.”