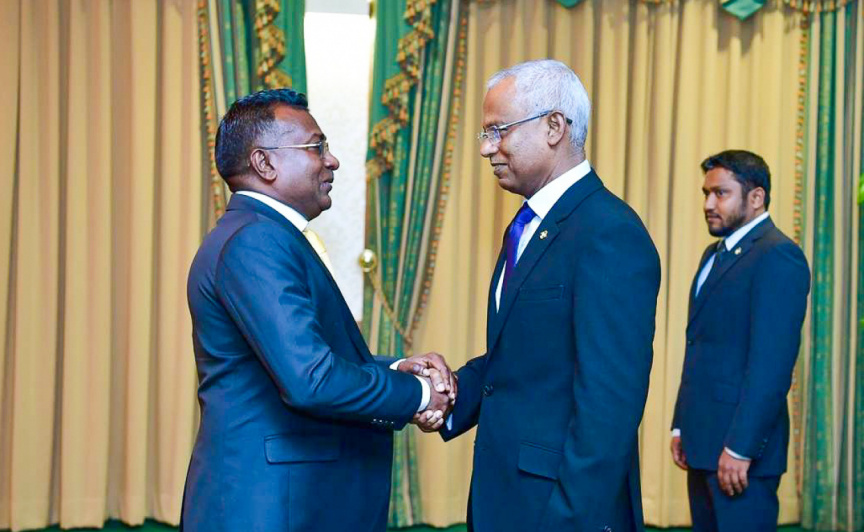 MP Abdulla Jabir and President Ibrahim Mohamed Solih during the ceremony to award MP Jabir of the special envoy of the President status on November 22, 2018. (Photo/President's Office)

Kaashidhoo MP Abdulla Jabir has requested in a letter to the President to include funds for an airport project in Kaashidhoo in the State Budget of 2020.

MP Jabir noted the difficulties of traveling to and from Kaashidhoo in strong winds since it is surrounded by rough seas. He also noted that local tourism was booming in other islands of Kaafu atoll and that Kaashidhoo does not get an income from fishing or tourism.

Kaashidhoo is abundant in land, and the fact that this was not utilized for local tourism, was described as a barrier by MP Jabir to the island’s development. The letter further read that the council had passed to ask the central government to establish a regional airport on the island. MP Jabir also asked the President to consider the wellness and development of the citizens in the letter that was accompanied by the proposal for the airport.

The MP also called on the government to kickstart a real estate sector in islands abundant in land such as Kaashidhoo with a law by taking an example from other developed countries. MP Jabir also stated that he was confident that the dependency of the Maldivian economy on tourism would be alleviated if the lands are made available to foreigners as real estate. He also proposed low-interest rates for loans regarding real estate.

MP Jabir claimed that if all of these factors were considered, it would be evident that establishing a regional airport would bring development and success to the economy, transport, and businesses of the country.

“I respectfully request the government to decide for the construction of an airport in Kaashidhoo and instruct the ministries to carry out the necessary work regarding the project and its commencement in 2020, because it will result in the opportunity to invest in Kaashidhoo, an island that has plenty of land, which will, in turn, result in the development and increase of self-sufficiency of residents of Kaashidhoo and Maldivians in general.” read the letter by MP Jabir to the President.

MP Jabir also sent letters to Finance Minister Ibrahim Ameer and Economic Minister Fayyaz Ismail requesting the ministries to do all they can to include the project of airport construction in the State Budget 2020.