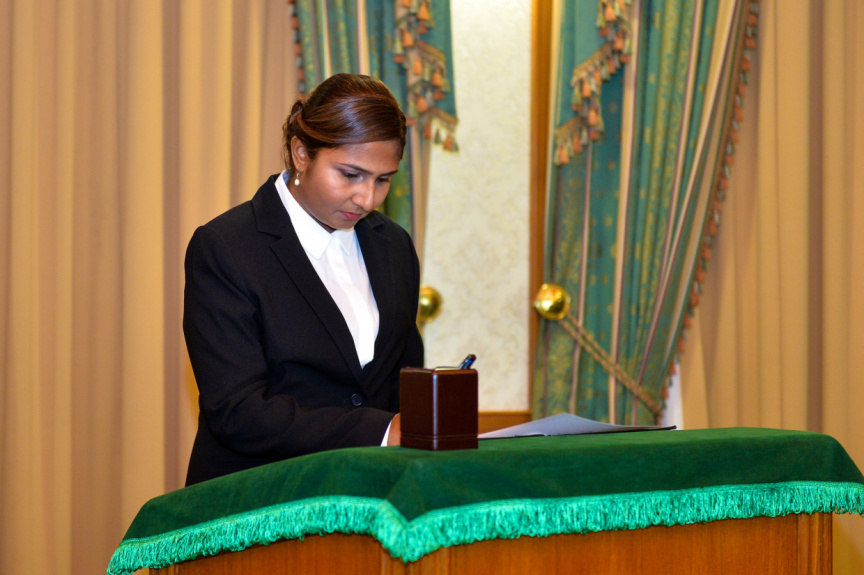 Supreme Judge Esmeralda Zahir; Judge Esmeralda was appointed as the chief judge of the Supreme Court by the JSC on November 20, 2019, making her the first female judge to be appointed to the role. (Photo/President's Office)

In one night, the highest court in the Maldives has seen some major changes. This included the suspension of one of its judges with impeachment proceedings looming over the horizon, the retirement of the senior judge of the court and the first time a female judge was appointed as the court’s senior judge.

Judge Areef retires from the bench after more than a decade

The chief judge of the Supreme Court Judge Abdulla Areef announced his retirement last night. The long-serving judge cited medical issues as the reason for his retirement. The judge had also recently resigned from his post as the President of the Judicial Service Commission (JSC).

Judge Areef’s retirement comes at a time when the JSC is investigation 14 disciplinary and ethics cases against the judge.

Judge Areef served as the senior judge on the Supreme Court bench on a temporary basis following the suspension and impeachment of the Chief Justice earlier this month.

Judge Areef (51 yrs) was first appointed to the Supreme Court bench on September 18, 2008. Judge Areef is a graduate of prestigious Medina Islamic University and previously served in the Criminal Court from 1998 to 2008.

One of the two recently appointed female judges to the Supreme Court, Judge Esmeralda Zahir was elevated as the senior judge of the court after the retirement of Judge Areef last night.

Judge Esmeralda has previously worked in the Maldivian Law Commission, Maldives College of Higher Education, and in the Maldives National University, where she served as the dean of the Faculty of Shariah and Law.

Impeachment of Judge Ghani on the horizon

The JSC has decided to suspend Supreme Court Judge Abdul Ghani Mohamed for 60 days and propose his impeachment to the Parliament.

The JSC’s decision comes at a time when it is investigating several disciplinary and ethics cases of Judge Ghani. The Anti-Corruption Commission is also investigating a case against Judge Ghani separately.