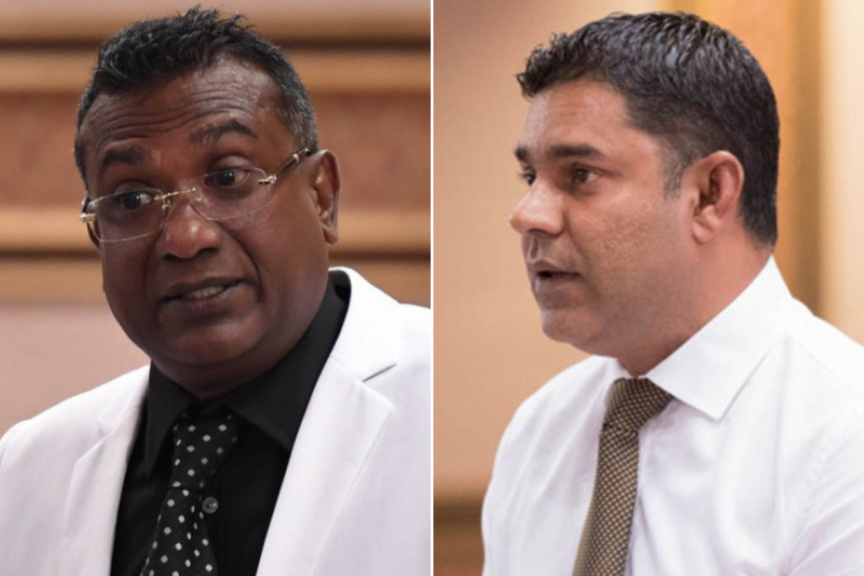 The heated war of words happened as MP Jabir was speaking during the time allocated for him in the budget debate in the Parliament today. MP Jabir used the 15 minutes allocated for him to accuse several members of the government of corruption and voiced his anger at how the state was making payments for settlements with private companies in agreements by using taxpayer money.

MP Jabir also stated that the Finance Minister Ameer would have to recover the funds paid out in such a manner.

“I will not give my approval for this budget to do that,” said MP Jabir angrily, before pointing the finger of corruption at President Ibrahim Mohamed Solih. Jabir then claimed that Minister Ameer was appointed to the role after paying Foreign Minister Abdulla Shahid MVR one million and also stated that several MPs were involved in the MPPRC corruption scandal. Finance Minister Ameer was present in the Parliament when MP Jabir made these stern accusations.

“Most of the people in the cabinet had received payments from the MMPRC scandal. How can I give my approval to this budget after this?” questioned MP Jabir.

MP Jabir then turned his attention to President Ibrahim Mohamed Solih and stated that the President has a “Ph.D. in scamming and conning people”. MP Jabir’s angry assertations were answered by Kinbidhoo MP Nashiz who took a point of order to state that “arrangements for doping tests needed to be made in the Parliament” in a thinly veiled jibe at MP Jabir.

MP Jabir quickly responded to MP Nashiz’s statements challenged MP Nashiz to take a doping test. MP Jabir did not stop here as he went on to accuse MP Nashiz of homosexuality.

“The MP that brought up this topic knows very well about homosexuality and alcohol,” said MP Jabir, to which the Speaker of the Parliament cautioned MP Jabir to refrain from speaking about someone who was not present in the Parliament.

However, MP Jabir, who now had MP Nashiz in his sights did not stop as he accused MP Nashiz of stealing and misappropriating the funds of DRP with Foreign Minister Shahid and was now working to do the same to MDP.

“I am speaking the truth; I am not lying and the Speaker of the Parliament would know this,” said MP Jabir.

MP Jabir was once again interrupted by MP Nashiz who accused MP Jabir of not paying taxes to the state and called on MP Jabir to refrain from talking about taxes. MP Jabir responded by stating that there he had no outstanding payments to be made to the state as taxes stated that everyone was aware of who it was that had to sell their assets to the bank for failing to pay back the bank.

“So let's stop talking nonsense,” said MP Jabir who was interrupted by Makunudhoo MP Mohamed Raaeee as well before his exchange with MP Nashiz.

The heated debate between MP Nashiz and MP Jabir comes on the heels of a similar argument between MP Jabir and the spouse of MP Nashiz, Addu Meedhoo MP Rozaina Adam last week.

MP Rozaina was also accused of receiving payments from the MMPRC scandal by MP Jabir to which MP Rozaina responded with a tweet accusing MP Jabir of making such statements for the failed bid by the spouse of MP Jabir to a seat on the Supreme Court bench.

Nasheed: MPs will be brought to Parliament for debate