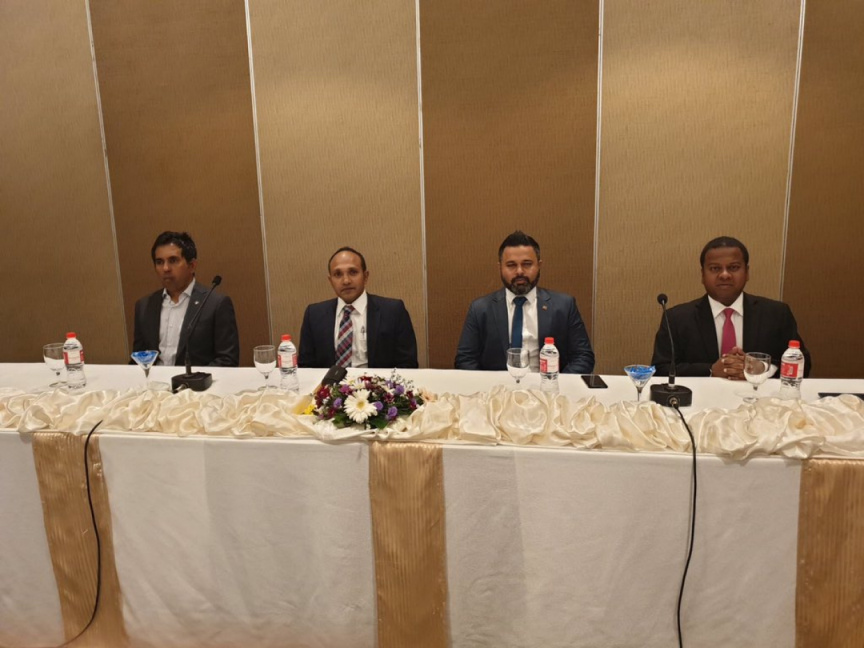 PPM-PNC delegated at a press conference in Sri Lanka on November 8, 2019. (Photo/PPM)

A delegation of senior officials from PPM, PNC, as well as Yameen’s attorneys are currently in neighboring Sri Lanka.

The delegation shared its concerns regarding the trial with the international media at a press conference on Friday.

According to PPM, the delegation is also conducting meetings with foreign diplomats and other international stakeholders to voice their concerns over the status of the Maldivian judiciary, and the challenges in holding a free and fair trial.

The Criminal Court had previously been scheduled to deliver its sentence in Yameen’s trial on Tuesday, November 5. However, the hearing was cancelled after the presiding judge, Chief Judge of Criminal Court Ahmed Hailam was placed under probationary suspension for 60 days by the Judicial Service Commission over alleged ethical misconduct, mere hours ahead of the hearing.

JSC’s move has been criticizes by Yameen’s attorneys who said that the move served as further evidence of lack of tolerance for political dissent, and lack of hope of an opposition politician, especially Yameen, ever receiving justice through the current judicial system.

Yameen’s trial is scheduled to resume on November 17. His attorneys have requested a bench trial.

India to be biggest source of grant assistance in '20