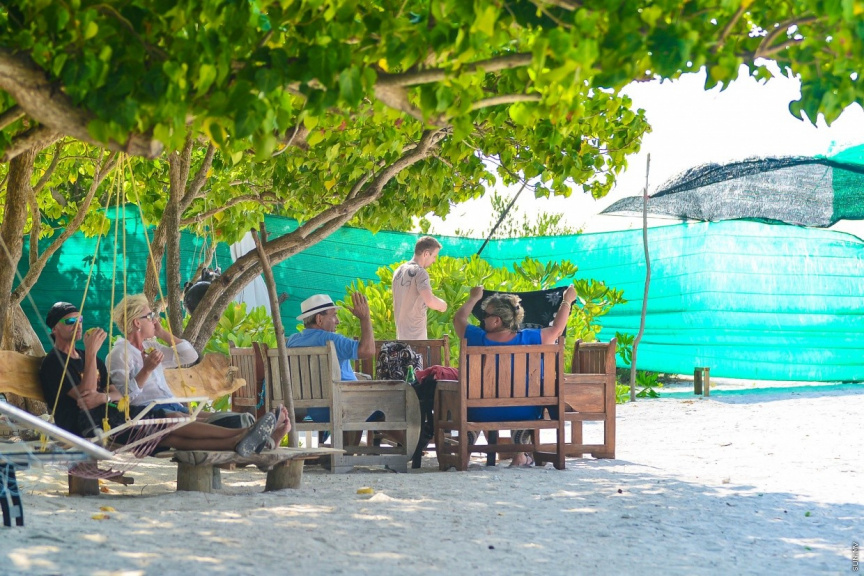 Tourists at the beach in K. Himmafushi. (Sun Photo/Fayaz Moosa)

Himmafushi, the closest island to the Maldives National Defense Force training base in Girifushi is in a state of panic as a stray bullet fired from Girifushi during a military excercise injured a tourist on a safari boat near the area.

Shaan Ibrahim, the President of the Himmafushi council shared the concerns of the islanders when he spoke to “Sun” today. Shaan stated that the island and the surrounding areas were a popular destination and dive spot for local tourism.

“This is a very busy channel. There is a lot of concerns from the people of Himmafushi,” said Shaan.

The stray bullet struck a 41-year old German tourist on a safari boat anchored out at sea near K. Girifushi yesterday. MNDF stated that the stray bullet ricocheted off a surface and weakened when it grazed the back of the head of the tourist.

The tourist was treated for non-life-threatening injuries at Himmafushi before he was transferred to Hulhumale’ hospital for further care.

There have been previous cases of bullets striking houses in Himmafushi in 2015 and 2017. MNDF stated that the bullets were not fired from Girifushi in these incidents.

The incidents were investigated by Police but no details of the investigations were divulged by the authorities in these cases.

MNDF stated that yesterday’s incident was bizarre since the safari was maintaining the appropriate distance away from Girifushi that was recommended when military excercises are conducted. The defense force further stated that it took the utmost care in the safety of soldiers and the public when conducting training sessions.

The incident is being investigated by MNDF and the use of live ammunition on Girifushi has been suspended pending the outcome of the investigation into the incident.

MNDF has also issued an apology for the incident and stated that safety measures will be taken to ensure that such incidents are not repeated.