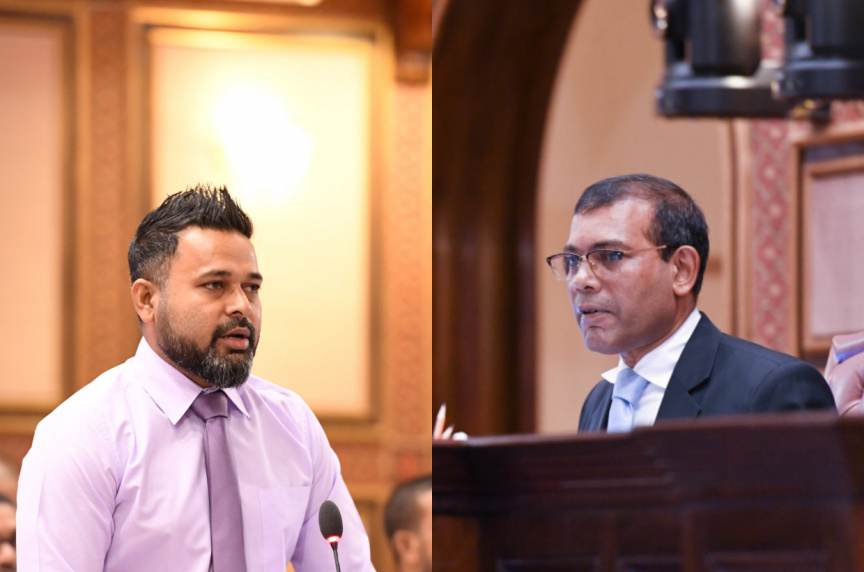 He issued the invitation at the end Shiyam’s address during the debate on a resolution presented by Hoarafushi MP Ahmed Saleem urging the Maldivian government to call international attention to the time running out to save the global community from the effects of climate change this Wednesday.

“I would very much like to go diving with you,” said Nasheed. “I will ask Ibrahim Moosa’s Fayyaz Ibrahim to arrange it for us. If you, honored parliamentarian, are ready for it, then we can continue this discussion underwater.”

Shiyam, while voicing his concern over climate change, had highlighted on his time working as a diving instructor.

“I worked as a diving instructor at a local resort. I used to go diving with a huge sack. To pick up litter. I noticed that every time I surfaced from an one-hour dive, I came up holding plastic and children’s diapers,” said Shiyam.

He said that continued dialogue over climate change had failed to produce a solution to the issue, and that the more litter was being collected from the ocean and the reefs than ever before.

He stressed that the Maldivian people need to be well aware of the effects of climate change, and that no outsider would take better care of the nation’s reefs than the locals themselves.

“I don’t know how much funding Maldives secured to save the nation from climate change this year alone. But the sad thing is, what’s saddening is, the lack of benefit touching these palm leaves, this Maldivian environment,” said Shiyam.

He urged the Maldivian people to give the issue of climate change for serious thought.