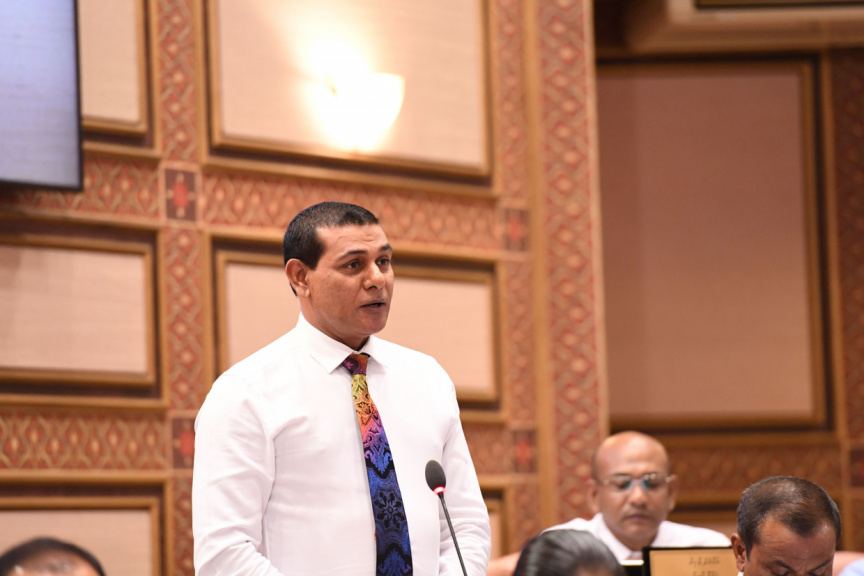 Meedhoo MP Ahmed Siyam Mohamed says imposing additional taxes without specifying its purpose meant robbing the Maldivian people blind, and has called on the Maldivian government to declare its reasons for pushing to impose income tax.

He made the comment during the parliamentary debate on the Income Tax Bill this Wednesday.

Siyam said that records released by Finance Ministry showed the Maldivian economy to be on a downward spiral, and that the reason for the downward spiral was the misappropriation of tax money.

He said that the Maldivian people were fed up with repeat misappropriation of taxpayer money by each consecutive government by putting a ‘wet cloth’ over their faces.

He said that local businessmen paid taxes from their hard-earned money to improve the livelihood, education, and health and welfare of the Maldivian people.

Siyam said that each President who is elected continued to consider the nation’s resources as personal property, which can be tampered with at will.

He said that the government, before settling with private parties over broken contracts, must first investigate the reason for such major damages requiring settlement to the private parties, and hold the culprits accountable.

Siyam said that Maldives was one of the most heavily taxes nations in the world, but that the tax money was being embezzled by the few in power instead of being invested on the welfare of the Maldivian people.

“I don’t want this tax to be imposed at present time. The people are already heavily taxed. What’s the purpose of this? Tell us what you are trying to do. Other states world-wide are required to declare the purpose of a tax which is imposed, to its people. They must explain it to the people. Imposing taxes on the income of the people without respect to any of this is just robbing the people blind,” said Siyam.

He said that he did not wish to see the small businesses run by people getting bankrupt due to imposition of additional taxes.

He said that his constituents were against the imposition of income tax, and that zakat al-mal was a better option than taxation.

“We need to consider the state of the nation when we think about imposing income tax. The present national economic growth is at 3.8 percent. This is a very gloomy picture by international standard,” said Siyam.

He said that the practice of opening more resorts, increasing more tourist beds, and hosting tourists at private residences without proper thought or regulations spelled the destruction of the Maldivian economy.

He said that every Maldivian wished to live a life of prosperity and contentment, and did not wish to live under the rule of a state under such heavy debt, or a ‘sinister’ state.

“Why don’t you, honored Speaker, explain where this tax money goes?” asked Siyam.