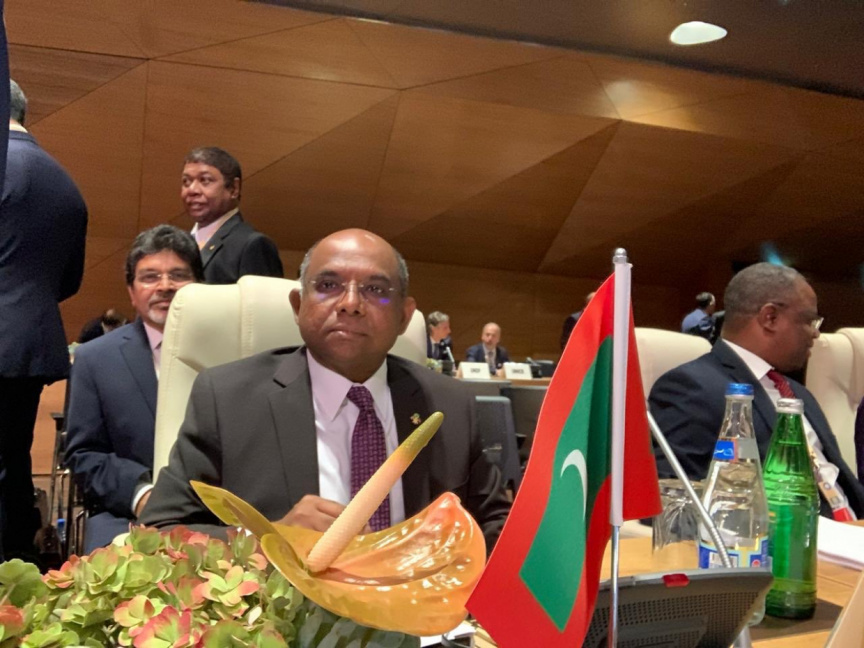 Maldivian Foreign Minister Abdulla Shahid at the 18th Summit of Heads of State and Government of the Non-Aligned Movement (NAM) on October 26, 2019. (Photo/Twitter, Director of Communications at Foreign Affairs, Miuvan Mohamed)

Maldives has reiterated its support to Palestine as an independent and sovereign state, and condemned the illegal occupation of Israeli settlers in Palestinian lands in its statement at the 18th Summit of Heads of State and Government of the Non-Aligned Movement (NAM).

The 18th NAM Summit is in progress at Baku, Azerbaijan.

The Maldives’ statement was read by Maldivian Foreign Minister Abdulla Shahid on Saturday, and highlighted Maldives’ position on Palestine, and reiterated its unwavering support for the creation of an independent and sovereign State of Palestine.

“Nearly seven decades on, our Palestinian brothers and sisters are still struggling for independence. How much longer are we going to sit back and watch the Palestinians endure this spectacle of malevolent justice? Israel is pursuing an unacceptable aggressive settlement regime. Eating away at Palestinian territory and torpedoing at the chances of a successful two-state solution based on the 1967 borders,” said Shahid.

He said that the Maldives was in full support of the political declaration of Non-Aligned Movement on Palestine.

“We need to rise and act for our brothers and sisters before they fall deeper into the abyss. We will continue this call until every Palestinian can live and lead a civilized life with peace and dignity,” he said.

Additional subjects which the Maldives’ statement focused on included climate change, terrorism, and Maldives commitment to re-engaging with the international community.

“Unlike the preceding centuries in which the gravest conventional security threats were clear and well-known, in the 21st century, this is no longer the case. We need to adjust to the present realities of the world and adapt to the non-traditional threats to international peace and security such as climate change, the buildup of cyber warfare, and terrorism,” said Shahid.

Describing climate change as the biggest threat to global security, Shahid urged the international community to come together to address the challenges and consequences rising from the changing climate.

“The Maldives will always lead from the front, in bringing to the world’s attention to the impact of climate change, and in urging countries to take further action,” he said.

“The government of Maldives, after a long period of absence, is pursuing a policy of re-engagement with the international community to reclaim our place in the global arena, and to contribute constructively to finding solutions to the common challenges we face,” he said.

Shahid is scheduled to hold meetings with senior officials from NAM member states at the sidelines of the summit.

The NAM comprises of 120 member states, and is one of the largest international organizations after the United Nations. Maldives became a member of NAM in 1976.