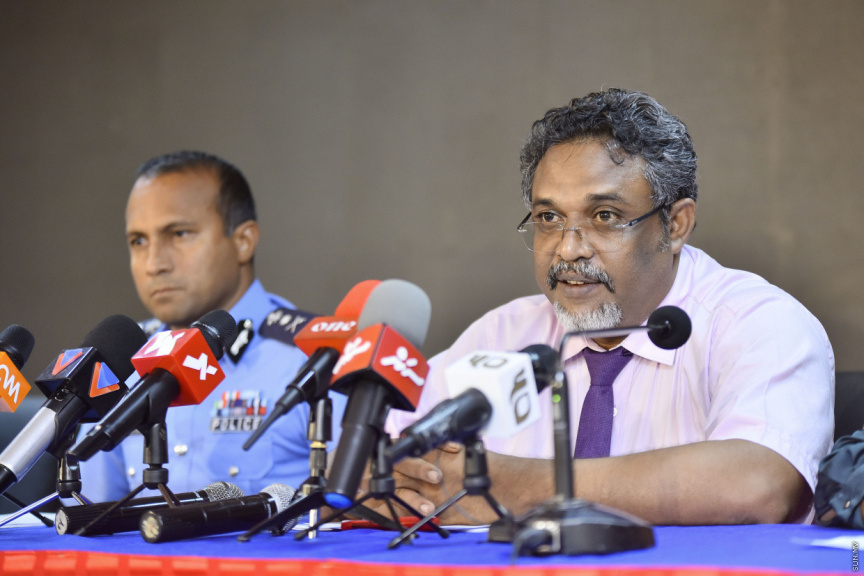 At a news conference held yesterday, the State Asset Recovery Commission’s President Ahmed Assad divulged eye-watering figures regarding the MMPRC corruption scandal as well as vague details of some of those who were involved and benefitted massively from the scandal.

"More than USD 143 million still owed to the state"

At a news conference held yesterday along with Police and ACC, Assad, the President of the Commission tasked with investigating the scandal declared that the state was owed around USD 220 million from the acquisition costs of the islands leased for tourism through MMPRC.

The figure previously stood at MVR 1.4 billion or USD 90 million, and the new figure revealed by Assad was due to previously unknown information that came to light after the commission’s investigation into the scandal made headway.

Assad also stated that a joint venture policy on leasing islands was formed and published in the gazette in 2013, but this policy was not followed by MMPRC in leasing the islands. Payments were collected without an official contract and in some cases with just an offer letter, according to Assad. Only 49 islands reached the contract phase, revealed Assad.

“If we only focus on the islands, then that means that Maldivian citizens are owed around USD 220 million,”

Assad also commented that the USD 143 million was not given up without any benefits to those involved in the scandal and that this would not be believable to any sound mind. The investigation is being conducted with a focus on these individuals as well, according to Assad.

The whole scandal was initiated when government companies borrowed funds in US dollars which were in turn paid back through MMPRC by leasing islands, announced Assad.

“The (borrowed) funds were settled with this (MMPRC acquisition costs). In that sense, we can assume that the state-owned companies paid back the funds they borrowed. But when we examine the source of the money, we can see that the money is coming from MMPRC.” said Assad.

The new information was attained by the information provided by former Vice President Ahmed Adeeb who played a massive role in the scandal and is now cooperating with the authoroties in the investigation and the information gained from SOF.

How much is owed to the state?

"An Ex CP repeatedly implicated in the scandal"

Police admitted that some of its officers were implicated in the scandal and that their cases were being investigated by the Police Professional Command. Seven officers are accused of receiving payments from the scandal according to Police who did not reveal the names of those involved due to the ongoing criminal investigation.

“We will reveal the identities once the procedures are fulfilled. Even if they were previously or are currently employed officers,” said the Commissioner of Police Mohamed Hameed.

Authorities did not reveal the details of the former Commissioners involved in the scandal, however, the post was filled by Hussain Waheed and Ahmed Areef during the administration of President Yameen, when the scandal was run. Abdulla Nawaz also filled the role as the Acting Commissioner for some time.

Assistant Commissioner of Police Mohamed Riyaz also stated in the news conference yesterday that the money was used to fund the primaries of the 18th Parliamentary election, including a bid to elect one MP as the Speaker of the Parliament.

The new figures has made the already biggest corruption scandal in the history of the country, even bigger and show the level of corruption deeply rooted in Maldivian politics and the influence of these power wielders.

MP stresses on role of auditors to tackle corruption

Taxi Drivers left asking ‘’Who will be next?’’