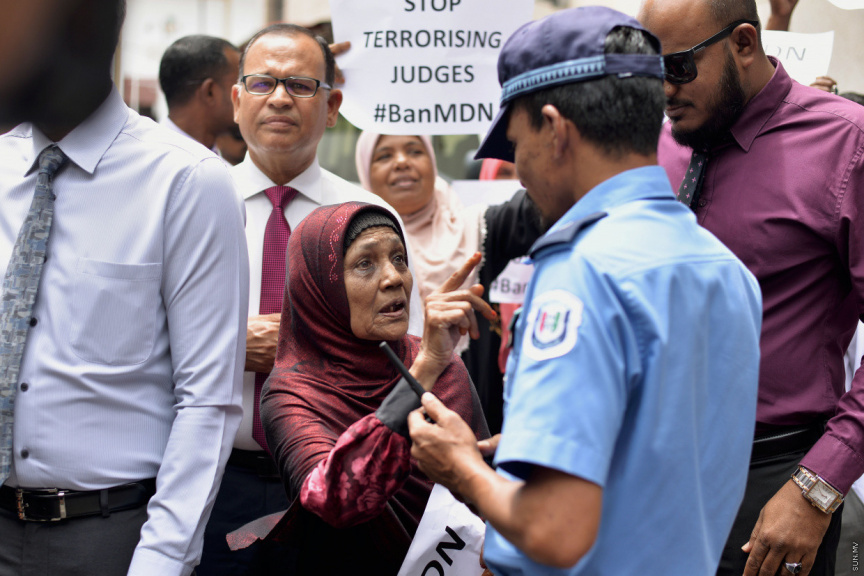 PPM supporters near Velaanaage on October 24, 2019. Opposition parties requested for the details of MDN officials regarding a controversial report by the organisation.

Opposition parties have sent a letter to the Youth Ministry requesting the information and identities of those who worked at the Maldivian Democracy Network in relation to the controversial report by the organization that included statements against the principles of Islam.

The letter by the opposition was submitted by Mahibadhoo MP Ahmed Thariq (Tom) and asked the ministry to provide a list of the names, National ID numbers and permanent addresses of everyone who worked at the organization up till October 19.

The Deputy leader of the main opposition party PPM and MP for Naifaru Ahmed Shiyam said that there have been talks that there were individuals working in the government who had been members of MDN previously, and highlighted a statement by Police admitting that Commissioner of Police Mohamed Hameed had worked in MDN for a short period of time.

The opposition members stated that the main purpose of the letter submitted was to find out the truth about these statements.

“The people do not accept that the delay in banning MDN is in the name of the investigation. It is very clear, there is nothing to investigate anymore. Those who are in powerful positions of the government should be dismissed and the organization (MDN) must be banned right now.” said Shiyam.

Shiyam also stated that this was the wish of the people and that the opposition was merely carrying out its duties and responsibilities.

The opposition also stated in a news conference yesterday that they would not stop pressuring the government to ban MDN. There is also planned gathering near the offices of PPM tonight in which the former President Abdulla Yameen is expected to take part.

The report also included statements belittling and mocking the Prophet Muhammed (SAW) and also statements that went against the principles of Islam.

While the opposition has called for a gathering, a statement by the Police on Sunday stated that some people were taking unfair advantages from the issue of the report. President Ibrahim Mohamed Solih has previously stated that the report by MDN was unacceptable and vowed to investigate and take action against those involved.

The organization has also been suspended until the investigation concluded.