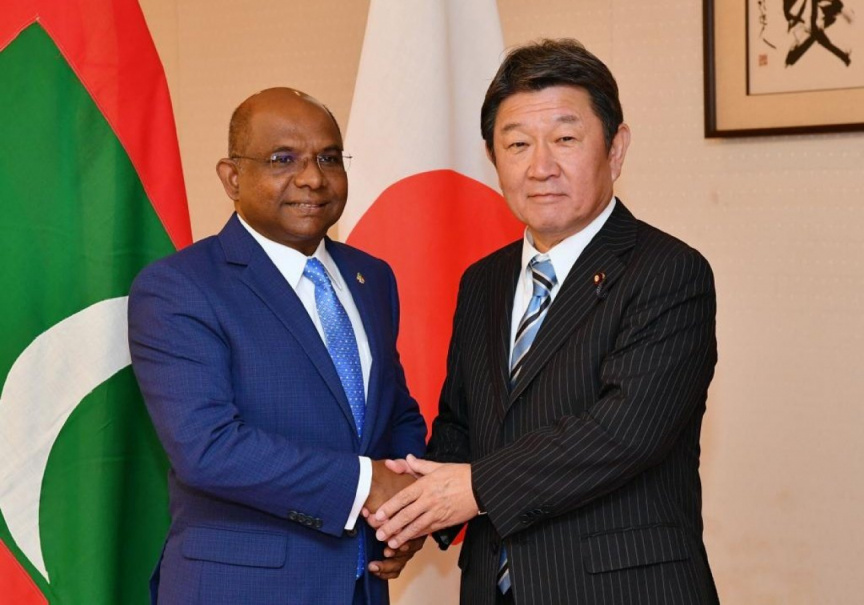 Maldivian Foreign Minister Abdulla Shahid has held talks regarding expansion of bilateral cooperation between Maldives and Japan with his Japanese counterpart Motegi Toshimitsu.

Shahid, who is in Japan for the enthronement of Japanese Emperor Naruhito along with President Ibrahim Mohamed Solih and First lady Fazna Ahmed, met with the Japanese Foreign Minister Motegi in Tokyo this Monday.

According to the Foreign Ministry, Shahid and Motegi discussed expanding the cooperation between Maldives and Japan in areas related to social-economic development of Maldives, before moving on to discussions regarding regional and global issues of mutual interest including maritime cooperation.

Shahid also took the opportunity to convey greetings on the occasion of the enthronement of Emperor Naruhito, and congratulated Motegi on his recent appointment as the Japanese Foreign Minister.

He also conveyed his sympathies to the government and people of Japan for the loss of lives and devastation left in the wake of Typhoon Hagbis – which has been described as the worst typhoon to hit Japan and left at least 78 people dead.

He reaffirmed the support of the government and people of Maldives to Japan at this difficult time, and expressed appreciation for Japan’s support to Maldives throughout its development journey.

The Maldivian contingent in Japan is scheduled to conclude its official visit and return to Maldives on October 27.