President: Will not condone mockery of Islam, the Prophet 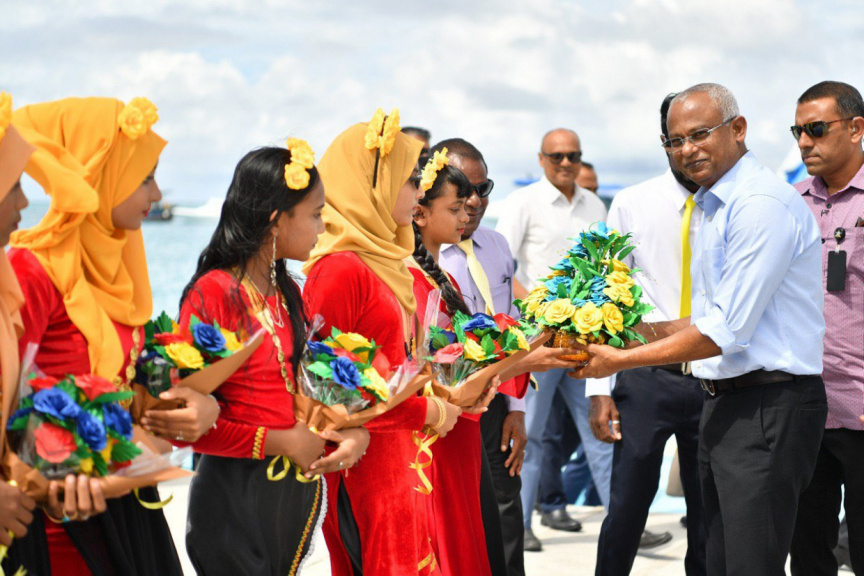 President Ibrahim Mohamed Solih says his administration will not condone mockery of the religion of Islam or the Prophet in Maldives.

He made the remark at his meeting with locals from Dh. Hulhudheli as part of his ongoing tour of Dh. Atoll this Wednesday.

“Islam is the state religion of Maldives. We will not allow for challenges to Islam, disparaging remarks against Islam, or mockery of the Prophet,” said President Solih.

He warned that the Maldivian administration also refused to condone incitement and aggression in the name of Islam.

“As you well know, we recently amended the Ant-Terrorism Act. The purpose of the amendments isn’t to curtain the right to freedom of expression. I believe, no Maldivian citizen should be travelling to Syria for war. This isn’t something Maldivian citizens should do. The wars in Afghanistan and Syria are terrorist wars. These wars aren’t condoned by the international community,” he said.

President Solih warned that his administration would not back down from taking measures to prevent the recruitment of Maldivian citizens for the wars in Afghanistan and Syria.

He warned that action will be taken against people who encourage and promote recruitment of Maldivian citizens for terrorist activities.

“The administration has a duty to take this action for the peace and stability of Maldives,” he said.

President Solih said that he hadn’t forgotten the reason the people elected him and his administration, and reiterated his commitment to maintaining national peace and stability, and delivering development to Maldives.

His comment comes amid continued public outrage over local NGO, Maldives Democracy Network (MDN) over its controversial 2016 report ‘Preliminary Assessment on Radicalization in Maldives’ which was found to contain disparaging remarks against the Islamic faith, the Holy Quran and Prophet Mohamed.

Local Islamic scholars, opposition politicians, and members of the general public have accused MDN of releasing the report to attack the Islamic faith in Maldives and create religious division.

MDN has issued a public apology and withdrawn its controversial report, which it says will be re-published after revisions with assistance of Islamic scholars.

The NGO is currently under criminal investigation, and has its license for operation as a NGO suspended.

Local Islamic scholars, opposition politicians, and members of the general public continue to call for senior officials of MDN to be held accountable for the report.

President Solih, is scheduled to conclude his visit to Hulhudheli this Wednesday evening and travel to Dh. Kudahuvadhoo – where he will take part in a reception to mark the 50th anniversary of Dh. Atoll Hospital.