Traffic changes in Male’ city: Congestion - is it better or worse? 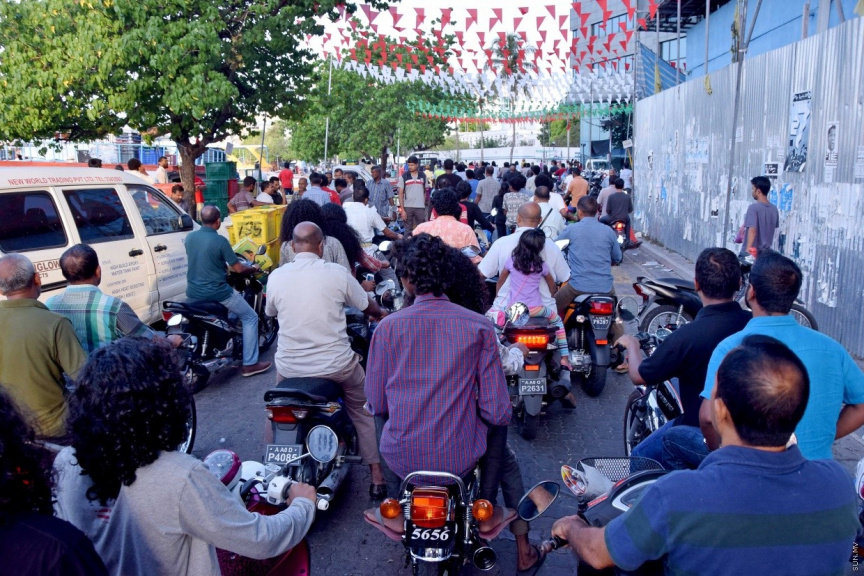 A traffic jam on a road in Male' city. (Sun Photo/Ali Naseer)

The center points of congestion in the city such as Majeedhee Magu and Alikilegefaanu Magu junction during peak hours is left in gridlock every few minutes. Traveling through these points can be a painstaking, frustrating and energy-consuming experience for anyone.

The changes that brought this on

So, what are the changes that sparked the chaos?

At the 74th meeting of the Male’ city council, held on September 3, the changes to the traffic rules were proposed by the Council’s Transport Committee Chair Ahmed Zameer. These changes were approved unanimously by the council.

The changes proposed reverting the traffic flow of Alikilegefaanu Magu to the way it was just a few years ago from South to North. Before this change, vehicles from Shaheedh Hussain Zuhair Hingun, Lily Magu and Hithah Finivaa Magu would reach Majeedhee Magu through Alikilegefaanu Magu. But this change resulted in these vehicles being diverted to somewhere other than one of the biggest roads in the city that connected the city from West to East.

The Faashana Kileyge Magu was also switched back to drive from North to South as a one-way street. This change saw traffic from Majeedhee Magu empty into Ameeny Magu via Faashanaa Kileyge Magu. Other than this, a few more minimal changes were brought to some other roads.

The changes by the council saw people working at offices in the Velanage and nearby businesses taking Husnu Heena Magu to reach Majeedhee Magu. A road that is significantly smaller than Alikilegefaanu Magu. This resulted in traffic jams occurring on that road.

A taxi driver who spoke regarding the traffic jams said that lunch hours, end of school and work hours in the afternoon and evening were when the jams happen the most and were not this frequent previously.

“Congestion occurs the most in the Alikilegefaanu Magu junction during peak hours of lunch, end of school and work hours. During these times, people from Velaanaage and offices in the outer roads of the city have to take Husnu Heena Magu to reach Majeedhee Magu quickly,”

The taxi driver’s words were echoed by Ahmed Muslim, a cyclist who said that traffic jams in Alikilegefaanu Magu were noticeable these days and that this was not the case previously.

“Imagine how many cars and motorcycles are added on to the street in two or three years. Maybe that is the reason for this change.” Said Muslim.

In every developed country in the world, traffic changes are introduced with extensive surveys and discussions with every relevant authority.

However, this was not the case with the changes in Male’ city. When asked if the advice of the Transport Ministry and Police were taken when bringing these changes, Council member Zameer stated that these authorities were informed of the moves. A repeat of the question of whether the counsel of these authorities was taken for the changes, was left unanswered by the councilman.

“Sun” has learned through a trusted source that the counsel of authorities and institutions such as Police and Transport Ministry were not taken for these changes by the council. There was also no surveys or analysis of the consequences of these changes conducted by the council.

Deputy Mayor Shamaau stated that public opinion was taken for these changes and that the numerous complaints were received during the elections period calling for changes to the city’s traffic. However, the point of view of some people was not like this.

“A survey carried out publicly would at least inform them (council) of what are the best changes to be brought. Even if the changes they brought are not, that is how it should be done. But this was not how it was done. Maldivesmaybe the only country that does things this way. Just because a previous government brought these changes everything is being turned upside down.” Said a member of the public who visibly unhappy with the changes brought by the council.

Deputy Mayor Shamaau was adamant that these changes resulted in curbing traffic jams.

“I am not trying to defend our decision. We can see even now that the traffic jams in Majeedhee Magu are less frequent than before. Previously, people coming from Henveiru to Maafannu or Maafannu to Henveiru could not drive without getting jammed. Now, they can drive without getting caught in a jam even during peak hours.” Said the Deputy Mayor.

Some taxi drivers were also content with these changes, who stated that it was easier to drive to the south side of Male’ city where many businesses and offices are located.

“This is how it was before. President Yameen was the one who changed it. The traffic of Alikilegefaanu Magu was changed to let his (President Yameen’s) car through. It was not done for the benefit of the public,”

“I think that even though it might cause jams now that is only because of the suddenness of the changes. Everything will go back to normal in a few days.” Said the driver.

Some drivers also suggested changing Faashanakileyge Faanu Magu so that it can be driven from North to South.

“Before, it was difficult to go from Maafannu to Majeedhee Magu to Galolhu and finally Ameeny Magu. We have to drive back (West) the way we came from Banafsa Magu or from the road where Sheesha Showroom is located,”

That is how difficult it is to get to Ameeny Magu. But now, we can reach Ameeny Magu straight from Faashanakileyge Magu, which makes it really easy.” Said a motorcyclist.

The sudden changes brought to the traffic flow might be easy for a few people, but the complications arising from it is a lot. The traffic changes should be brought with careful consideration and research. This must not be a whimsical step to be taken whenever someone in charge feels like it.