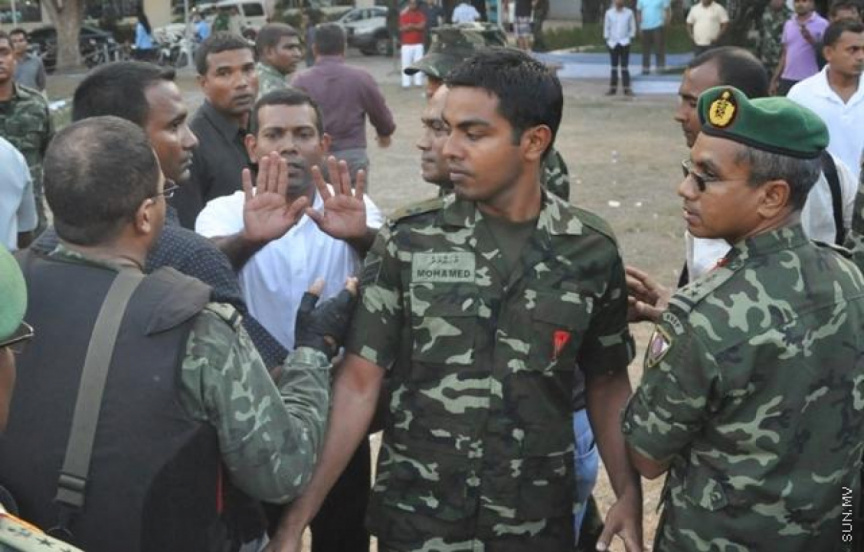 The Government Oversight Committee of the Parliament has made the decision to seek legal counsel from the Parliament’s Counsel-General regarding a fresh inquiry into the incidents of February 7, 2012 which saw the downfall of former Maldivian leader Mohamed Nasheed’s administration.

The Commission on National Inquiry which had conducted the official inquiry into the case dismissed claims by Nasheed – who presently serves as the Speaker of Parliament - that he was forced out of power in a coup d’état. It also dismissed claims of mutiny and duress.

The findings continue to de disputed by Nasheed and MDP - alleging CoNI’s findings to be politically influenced.

The decision by the Government Oversight Committee comes in response to a petition sent to the Parliament by a private citizen requesting a fresh inquiry into the overthrow of Nasheed’s administration.

Members of the Government Oversight Committee convened to discuss the petition this Tuesday.

The members noted that an inquiry had already been conducted into the case, and questioned whether the Parliament had the legal grounds to launch a fresh inquiry into the case.

The members voted to seek legal counsel from the Parliament’s Counsel-General regarding the issue.

The petition reads that while all who had gathered at Republic Square on February 1, 2012 may not have been involved in the coup, the masterminds behind the coup and the people who lead the movement must be investigated and held accountable.

One of the people named as a ringleader on the petition - MP Mohamed Nazim is incidentally also a member of the Government Oversight Committee charged with making a decision regarding a fresh inquiry into the 2012 government overthrow.

He said he did not object to a fresh inquiry into the case if allowed by the Parliament’s Counsel-General.

“The February 7 case looked into as agreed by all the politicians at the time with the CoNi report. The case was closed and the truth revealed through the work of international investigative agency and selected local investigators as agreed. This case also took place some seven years ago. If we are to give in to our emotions, then I say proceed with an inquiry. This should be investigated and the true culprits held accountable,” said Nazim.

He said that lawmakers must also decide whether to chase after the past or to let bygones be bygones and look toward the future.

Central Hithadhoo MP Ahmed Rasheed seconded Nazim’s proposal and said that a fresh inquiry must be conducted if due process allowed any leeway.

“Such cases must be looked into. We need to make history doesn’t repeat itself. I am in favor of looking into this and meting out the harshest punishment allowed by law to the culprits if there even the slightest legal leeway,” said Ahmed Rasheed.

Meanwhile, Mahibadhoo MP Ahmed Toriq said that the committee must also look into the cases of arson and destruction of state property in riots across Maldives which took place on February 8, 2012, if it were to launch a fresh inquiry into February 7, 2012.

Central Fuvahmulah MP Hussain Mohamed Didi while he personally believed Nasheed to have been forced to resign in a coup, the findings by CoNI in the matter were different.

He noted that many believed members of CoNI to have been bribed and granted other political favors to dismiss the coup claim, and was therefore in support of a fresh inquiry if there was any legal leeway.

Following discussions by Government Oversight Committee members, its chairperson, West Maafannu MP Mohamed Falah said that the incidents of February 7, 2012 had been one of the biggest upheavals in recent Maldivian history, but that the committee cannot proceed with a fresh inquiry unless given the nod from the Parliament’s Counsel-General due to CoNI’s inquiry.

He announced that a decision regarding a fresh inquiry will be made at the committee’s next meeting.

“We need to clarify whether this case can be re-investigated. We cannot make a decision until then,” said Falah.

With respect to Toriq’s proposal for a re-investigation into the nation-wide arson attacks on February 8, 2012; Falah said that the arson attacks had been investigated by the police, and multiple people prosecuted for the crime.

He said that the committee will also seek legal counsel from the Parliament’s Counsel-General regarding Toriq’s proposal.

“I cannot call for a vote to make a decision until we receive legal counsel,” said Falah.