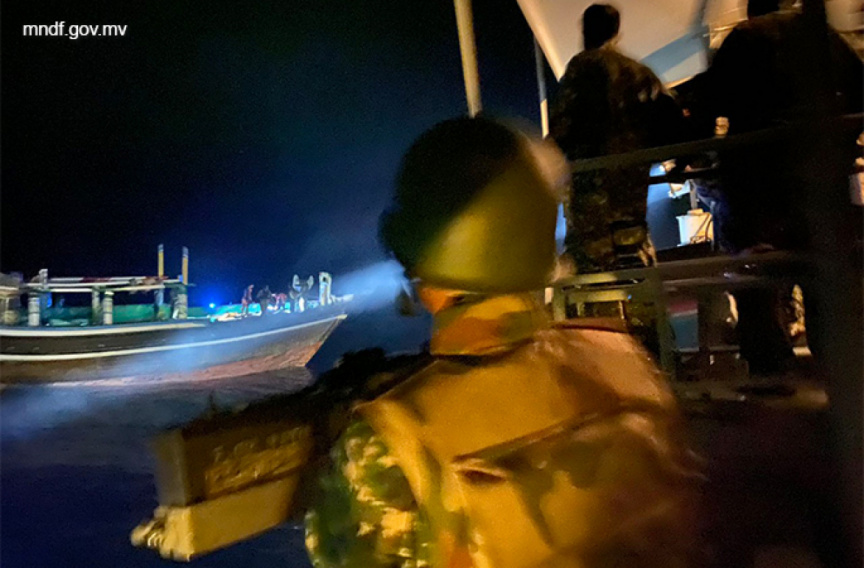 The police have arrested the manager of the local boat, Hedheykuri-7, which was captured this week just as it approaching an Iranian-flagged boat carrying 150 kilos of drugs.

The Iranian-flagged boat and Hedheykuri-7 were captured from 27.5 nautical miles off the coast of H. A. Thuraakunu - which falls within the Maldives Exclusive Economic Zone - in a joint-operation by the Coastguard and the police on Saturday, October 5.

Sun has been informed the police arrested the manager of Hedheykuri-7 – who is the son of the boat’s owner – last Monday night.

The police have yet to officially confirm the arrest.

Hedheykuri-7 is registered to H. A. Dhiffushi. It was captured will four of its crew; two local citizens and two expatriate workers.

A local resident told Sun that the boat is approximately 95-feet in length, and was previously used for fishing but was later used to transport cargo.

According to the local resident, the boat transports cargo to all parts of Maldives, and departed from Dhiffushi on September 25.

The police report that authorities had yet to verify the origin of the international boat caught trafficking the drugs, though it was found bearing the Iranian flag. The boat was captured with six people onboard.

The police also have yet to disclose the exact quantity of drugs seized in the operation, commenting only that “packages containing a large quantity of substances suspected of being narcotics” was found from the boat – which, according to a tweet by Commissioner of Police Mohamed Hameed – have a street value of MVR 59.2 million.

Indian newspapers report the police seized 150 kilos of heroin from the boat.