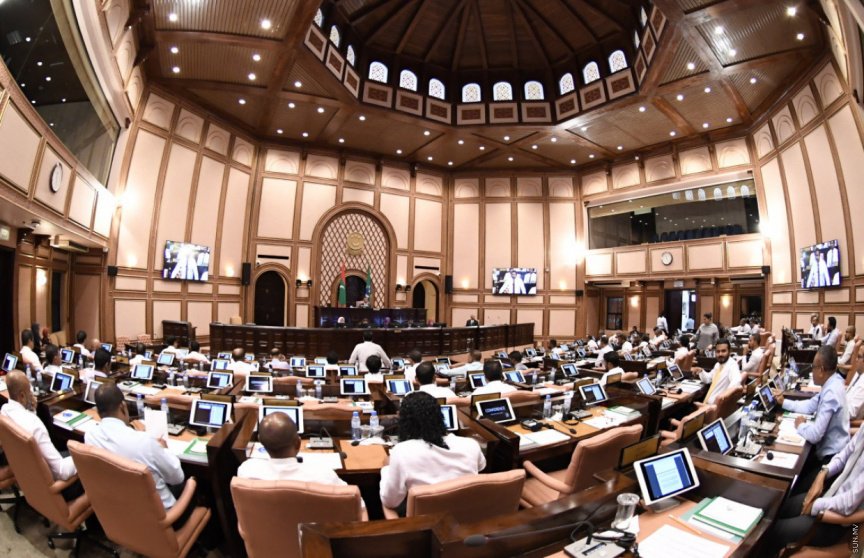 The Parliament voted today to pass the amendments to the Anti-Terrorism Act of the country.

The bill by South Henveiru MP Hussain Shaheem was passed with the vote of 52 members after several small amendments were made. No MP voted against the bill which had raised concerns when it was first presented to the parliament.

The new amendments give the crime of terrorism a wide meaning and also give authorities and police far-reaching powers of search and detention.

Crimes of Terrorism in the bill

There are also provisions and exceptions included in the bill of situations when a person can go to a war-torn location. These instances include to provide humanitarian relief aid, under the mandate of another countries' government and to enforce a court order. Press freedom of traveling to such areas for journalists is also provided under the amendments.

The hotly debated point of 48 hour detention period of suspects provided under the bill was also amended in accordance with the constitution so that detainees would have to be brought before a judge within 24 hours.

Some types of evidence unusual for regular cases are also acceptable in court under the amendments to the Anti Terrorism Bill. These include confessions, statements made in accordance with a charge regarding the death of a person is also accepted as evidence in the amendments.

Evidence accepted under the amendments

Why were these changes brought?

The amendments to the Anti Terrorism Act will be enforced once the President assents the bill. These sweeping changes were in relation to the report by the Commission on Deaths and Disappearances (DDCOM) after investigating the case of journalist Ahmed Rilwan Abdulla who had been missing since 2014.

The DDCOM's investigation had reached the conclusion that Rilwan was murdered and decapitated on a boat at sea, shortly after his abduction in Hulhumale' in 2014. The DDCOM's report also named several individuals and an Al Qaeda affiliated extremist group operating in the Maldives as being behind the murder of Rilwan.