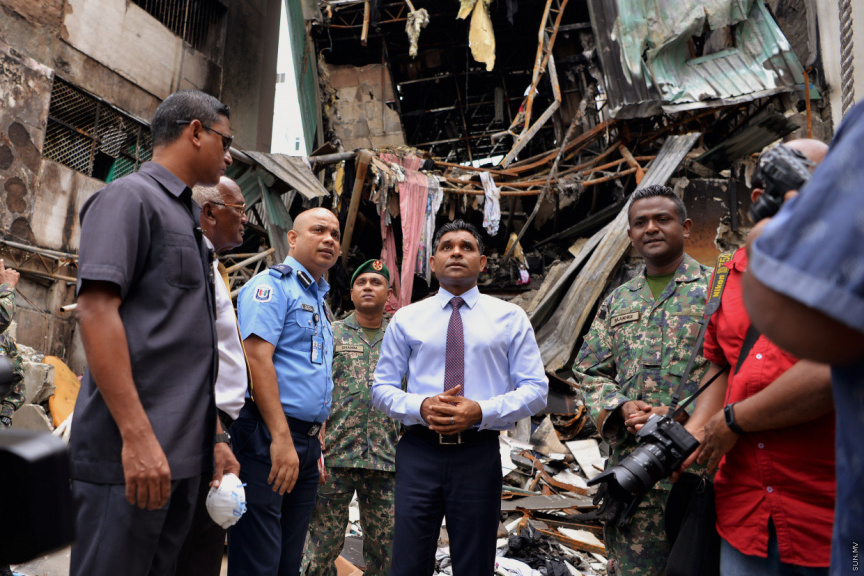 Maldivian vice president Faisal Naseem says the recent fire which devastated the Abadhahfehi Magu neighborhood of Henveyru district served as a great lesson on the dire consequences of lack of proactive action in dealing with fires.

He made the remark during a tour of the affected neighborhood to observe ongoing efforts by security forces to make the it fit for inhabitation this Thursday.

Speaking to press after his tour, Faisal Naseem noted that the magnitude of dire consequences of lack of safety precautions was often realized after devastating incidents, and stressed the need for proactive action.

“This incident serves as a great lesson. As per President Ibrahim Mohamed Solih’s instructions, the priority of the government is to relocate warehouses,” said Faisal Naseem.

He also commended the security forces and private citizens for their efforts in putting out the fire and carrying people to safety.

“Even one life is invaluable. We are deeply saddened by this. But at the same time, we are also grateful that, by the grace of Allah, no one else lost their lives, given the magnitude of the incident,” said Faisal Naseem, noting the death of Aishath Shauna, 46, who had been trapped inside her apartment and was later found burnt beyond recognition.

Faisal Naseem also provided assurance of continued assistance to the families affected in the fire. He said the government was working hard to enable them to return back home and to normal life.

The fire which devastated the Abadhahfehi Magu neighborhood took place on Friday, September 20. It originated from inside a chemical warehouse located in H. Thilafushi, which spread to three other chemical warehouses and to six residential buildings – containing 26 residences.

Over 700 people were affected by the fire – 302 of whom continue to be provided temporary housing by National Disaster Management Authority.