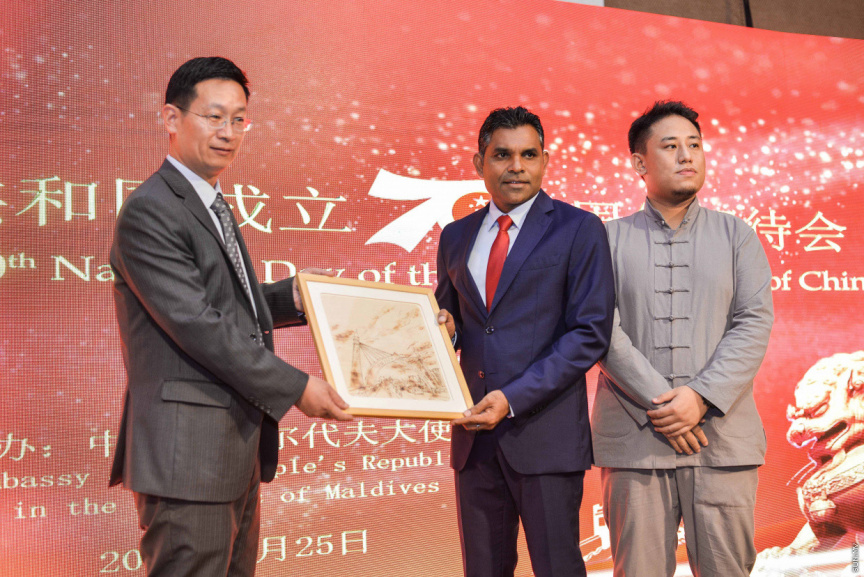 He made the remark in his speech at the reception held at Kurumba Maldives to mark China’s 70th national day on Wednesday.

Noting that Maldivian President Ibrahim Mohamed Solih had repeatedly declared China one of Maldives’ most important development partners, Lizhong said Shahid’s recent official visit to China had served to deepen the political trust between the two countries and hailed it as a platform to launch Maldives-China relations “to a whole new level”.

“This visit has deepened the political trust and Belt and Road cooperation between the two sides which will promote the China-Maldives future-oriented all-round fraternity with cooperative partnership to a whole new level,” said Lizhong, noting the agreements exchanged in areas of economic cooperation, technological cooperation, sports cooperation and people-to-people exchanges during the visit.

He also noted that this year marked 47 years to the establishment of official diplomatic relations between Maldives and China.

He said that Maldives-China relations had continuously deepened during the period, and that it served as an example of two states working together for mutual benefit and support despite seeming differences.

“China-Maldives relationship is now standing at a new starting point. And China will continue to work with Maldives to further strengthen our traditional friendship and continue to provide support to socio-economic development of the Maldives within our capability so as to deliver more concrete benefits to the two countries,” said Lizhong.

Foreign Minister Shahid’s recent visit to China had been his first visit to the country since assuming office, and had come amid a period of rising speculations over possible deterioration of ties between the two countries.

However, Maldives and China, during the visit, exchanged three cooperation agreements; and the Chinese Foreign Minister Wang Yi provided assurance Chinese support to development projects in Maldives will not suffer from any changes in government.

"FTA will promote cooperation between China-Maldives"

''Anti-terror bill would not violate constitution''