Fire brings chaos to Henvryru neighborhood: Father, someone is setting off fireworks! 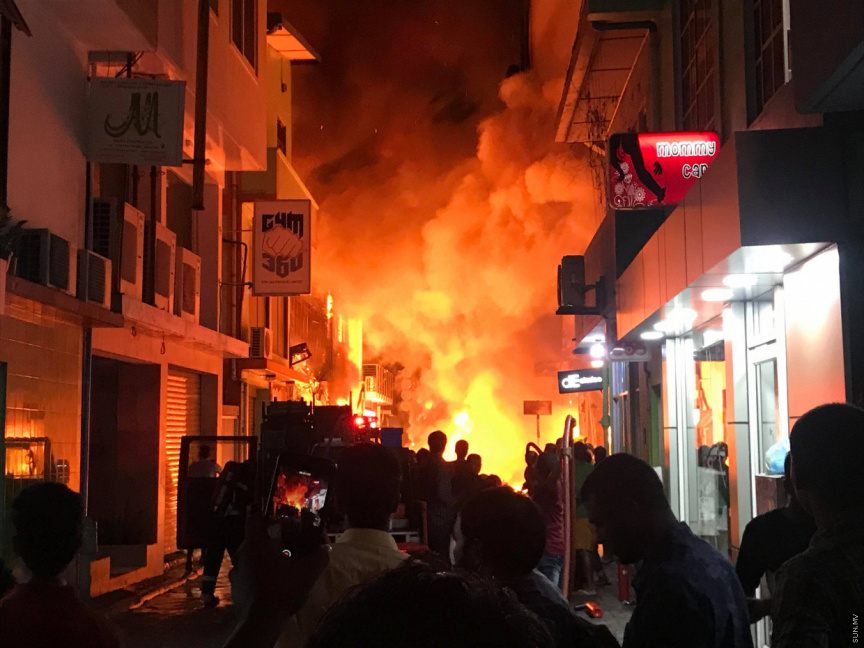 “My 13-year-old child called out to me and said ‘Father! Someone is setting off fireworks! I don’t know where from. Let’s go see,’” said Abdul Waheed, recollecting the chaotic first moments of the fire which raged through four chemical storage facilities and six residential buildings in his neighborhood in the Henveyru district of Male’ last Friday. “And I responded, ‘my child, it’s not fireworks. It’s not the sound of someone setting off fireworks’. And he said, ‘no father. There’s something huge going on.’”

Abdul Waheed and his family resides in H. Furunumaage – located on a small street near ADK Hospital which gives way to the larger Sosunmagu. Abdul Waheed said that the fire had only been raging at a chemical storage facility in H. Thilafusheege when he first rushed out of his home.

“When I rushed out, three motorcycles parked outside the shop opposite the building has also caught fire. A lot of the bystanders were videoing it,” recalled Abdul Waheed.

The chemical storage facility soon started to spread. The flames from the motorcycles spread to a shop which specializes in children’s merchandise at the corner of H. Ewau.

“I, along with several others, were emptying the alleyways of the parked motorcycles at the time. And then the fire spread to the neighboring storage facility,” said Abdul Waheed.

The spread of the fire was interjected by the sound of loud explosions from inside the storage facility. And the fire kept gathering strength.

MNDF later announced that total four chemical storage facilities had burned down in the fire. The loud explosions were the sound of chemicals stored at the facility combusting.

A FAMILY OF FOUR PLEAS FOR HELP

Abdul Waheed said that residents of the neighborhood evacuated their homes soon after the fire erupted. But one family were left stranded on an apartment located in H. Ewau, as the fire spread through the shop below.

“I could hear the sound of someone screaming from one of the upper floors the flames hadn’t reached yet. She was crying for help to find a way to get them down. Begging to find a way. I was there with four others. The woman and her three children were stranded on the terrace of the building,” said Abdul Waheed.

He said that he carried one of the children to ADK Hospital in his arms.

He said that the family of four weren’t residents of H. Ewau, but most likely had climbed to the terrace of H. Ewau from adjacent H. Randhuvaani Aage, which had also caught on fire.

Aishath Shauna from Th. Buruni, whose life the fire claimed, had resided on H. Randhuvaani Aage – the building directly opposite to H. Thilafusheegee - the building which housed the chemical storage facility the fire originated from. Shauna had resided in the building with one of her brothers. The fast spreading fire had trapped her in her apartment. MNDF later reported that her body, when found, had been burnt beyond recognition.

The fire, which erupted at approximately 7:30 pm, was controlled near midnight. The fire in addition to its one tragic casualty, affected approximately 400 people.