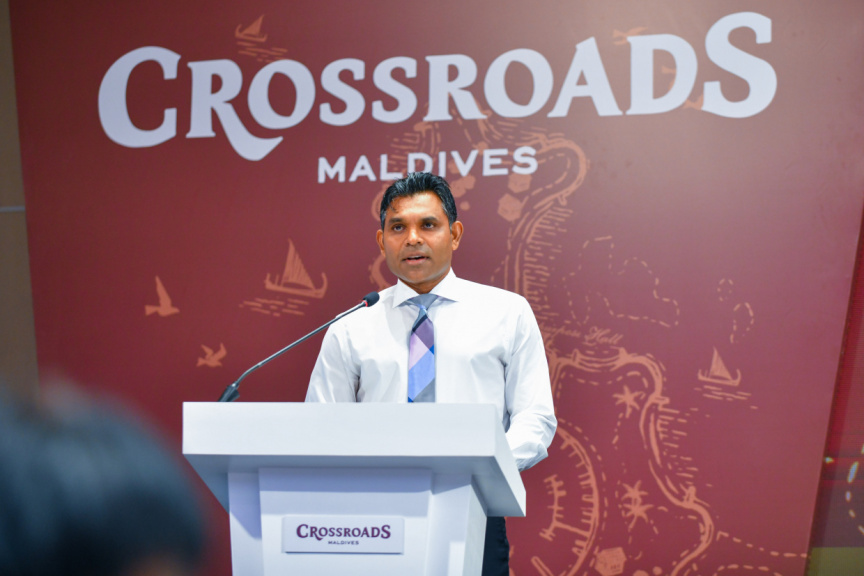 Vice President Faisal Naseem has stated that projects such as the Cross Roads resort that opened in Emboodhoo Finolhu yesterday were part of the government's planned targets.

The Vice President was speaking at the opening ceremony of the resort which was first initiated during the previous administration. The project was carried out in two phases and cost around USD 700 million. There are further plans in place to develop the nine islands under the project.

Speaking at the ceremony, the Vice President stated that Cross Roads was a breathtaking addition to the Maldivian tourism industry and praised the massive project that has finally turned into reality.

"Cross Roads represents an exciting new direction for the Maldives’ Tourism Industry. Nothing of this ambition has ever been attempted before in this country. As I look at my surroundings I am truly impressed by the imaginative design and feats of engineering that made this place possible,"

"I applaud Singha Estate for the comprehensive measures they undertook to ensure that the construction of Cross Roads occurred in harmony with the Maldives’ natural blessings, proving that sustainable tourism and large-scale economic progress can occur hand-in-hand." said the Vice President

The Vice President then noted that Cross Roads is the largest tourism-related project to have been completed in the country to date and stated that confidence was high that it will help boost the economy immensely.

He also emphasized the government's commitment to facilitating projects of a similar scale and vision in the country. The Vice President then highlighted the desire to diversify the Maldives’ share of the tourism market, to include regular guests from every corner of the world.

"Tourism remains the Maldives’ most important economic sector and a key engine of national job growth. The health, vitality, and dynamism of this industry are linked to our continued economic prosperity. The Government wants to not only ensure the continued success of this industry but for it to soar to new heights,"

"That is why this Government remains committed to encouraging visionaries and entrepreneurs from all over the world to pursue business opportunities in the Maldives. As should be manifest by the successful opening of Cross Roads, no project is too large and no vision is too bold to be able to thrive here." said the Vice President.

"We welcome further Foreign Investment in the country, to build more mutually beneficial partnerships with the Government, to help us in our overarching goal of securing a better future for the Maldivian people." said the Vice President as he was concluding his speech.

Over 15,500 tourist arrivals within first 5 days