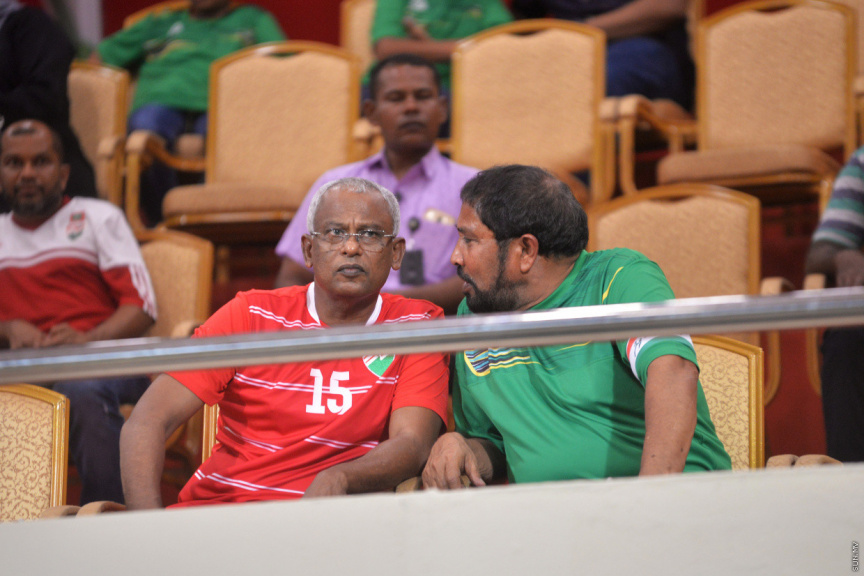 Qasim, who had served as Speaker of the 18th parliamentary assembly, has recently been very vocal in his criticism against his successor, former Maldivian leader Mohamed Nasheed.

Speaking during a JP gathering on Sunday night, he accused Nasheed of inciting discord and affecting national peace and security.

“And what I see from his [Nasheed’s] remarks are stones thrown at the President. Indirectly, and in different ways. I don’t know exactly what’s going on. Whether it’s an internal dispute,” said Qasim.

Qasim, who serves as Maamingili MP, said that Nasheed had been working from within the Parliament to assign blame to the current government.

He criticized the decision by ruling MDP’s parliamentary group leader Ali Azim to go to the press with his concerns regarding the counter-terrorism bill and announce his wish to discuss the bill with government officials.

“Do they need to announce it to the public and talk about it to the press? The PG leader of the party could have directly called the President to discuss whatever he wished, isn’t it? We are talking about the leader of 65 lawmakers,” said Qasim, criticizing Ali Azim.

“So there is some hidden agenda for all this. What is this agenda? What are they trying to gain? What is going on? Those who think politically and sound minded citizens of this country will realize that this isn’t right. There’s something else going on along with this criticism,” said Qasim.

Speaking to Sun regarding the counter-terrorism bill last Sunday, Ali Azim said that MDP lawmakers were concerned regarding certain aspects of the bill, and planned on addressing the concerns with officials from Attorney General’s Office and the police.

Qasim said that though the public may perceive slights against the government to be no big deal, they were indicative of a great problem.

“Making remarks to affect the sustainability of the government and the national peace and security, and sidelining us this way and that, isn’t right at all,” said Qasim, adding that President Solih had never committed an unconstitutional act, and voicing his confidence that he never would.

Qasim also accused Nasheed of being unhappy over the existence of Islamic faith in Maldives.

“Some people are concerned over the existence of Islamic faith in Maldives. A certain someone is concerned. This isn’t right. If I were to specify who the person is – it’s the Speaker of Parliament, President Mohamed Nasheed,” said Qasim.