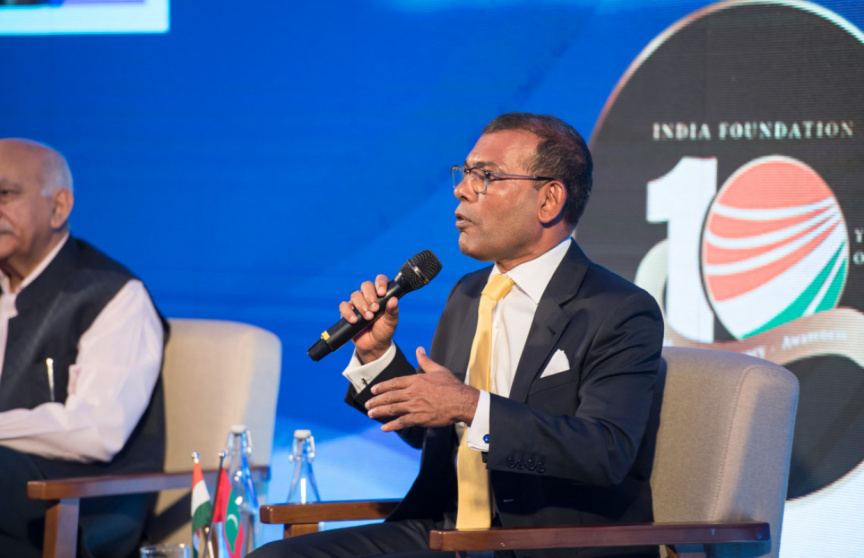 Speaker of Parliament, former president Mohamed Nasheed has accused China of grabbing more land than the East India Company which had seized control over large parts of the Indian subcontinent and colonized parts of Southeast Asia.

Nasheed voiced his criticism of the Chinese government during his speech at the 4th Indian Ocean Conference held in Maldives from September 3 – 4.

Nasheed, who in addition to serving as the Speaker of Maldivian Parliament, also serves as leader of ruling MDP, said that the Chinese government, in collaboration with former Maldivian president Abdulla Yameen Abdul Gayoom, had put Maldives in deep debt.

Nasheed said that a large amount of commercial money had come to the Maldives during Yameen’s administration, which had been invested or spent on inflated projects - most of which were funded by China’s Exim bank.

“Get hold of a government, buy up a parliament, change the laws, get unsolicited contracts then inflate the price of the contract to the level due to which business plans failed here. Give commercial loans and then, off course, they will not be able to pay it back. When you can’t pay back, they ask for equity and with equity, you relinquish sovereignty, including the peace of the Indian Ocean. I am referring specifically to China,” said Nasheed.

He said the issue was of deep concern to the current administration, which believed it to be unfair.

He said that land grabbing had become a global phenomenon in recent times, but that such cases were most common in regions where protection of human rights is poor.

“It has a combination of practice, international and domestic drivers the Maldives up until the recent presidential election in 2018 was a flourishing land grab paradise," said Nasheed.

He said that while Maldives was open to more foreign investment, including Chinese investment, but that it must be impinged on transparency in the tendering process.

“It must have democratic oversight and we must be able to benefit from the investment. It can’t be vanity projects,” said Nasheed.

The East India Company was a British company established in the 17th century for trade in the Indian Ocean. Though it started as a monopolistic trading body, the company later became involved in politics and acted as an agent of British imperialism in India from the early 18th century to the mid-19th century up until India gained its independence in 1947.

Nasheed has long since accused China of setting debt traps in an effort to gain control of the South East Asian region – allegations which the Chinese government denies.