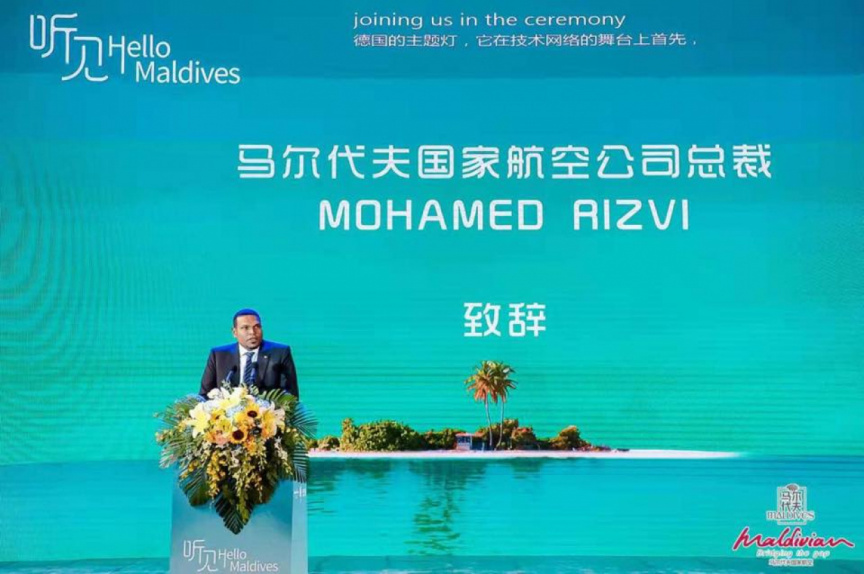 Managing Director of Maldivian, Mohamed Rizvy speaking at the conference in China; Maldivian has announced that it will be starting direct flights between Maldives and China. (Photo/Maldivian)

The national airline of the Maldives, Maldivian is preparing to conduct direct flights between Maldives and China.

Maldivian currently carries out flights to six destinations in China with an Airbus A-321 airplane. However, since it is not a wide-body aircraft, Maldivian has been carrying out the flights through a transit route with Bangkok, Thailand as a stop.

Maldivian will be carrying out the new direct flights between Maldives and China with the newly acquired A330 airplane. The airline announced in the tour operators' conference being held in China currently.

Managing Director of Maldivian Mohamed Rizvi stated to the "Sun" that the airline faced some difficulties in expanding its operations in China because of the transit routes.  The new acquisition of A330 will open up the opportunity for the airline to increase the number of passengers, reduce fares and add more cities in China to its operations, stated Rizvi.

"This is the first time that we are acquiring a wide-body aircraft. We are thinking of purchasing the A330 aircraft. Right now, we are going through the process of obtaining the approval of the board. This new development will allow us to expand our operations in China. Some agents have expressed interest in other cities in China," said Rizvi.

With the new aircraft, Maldivian hinted at plans to start its operations to destinations in Europe as well. Other than the local operations of the company, Maldivian currently conducts flights to India, Bangladesh, and China.