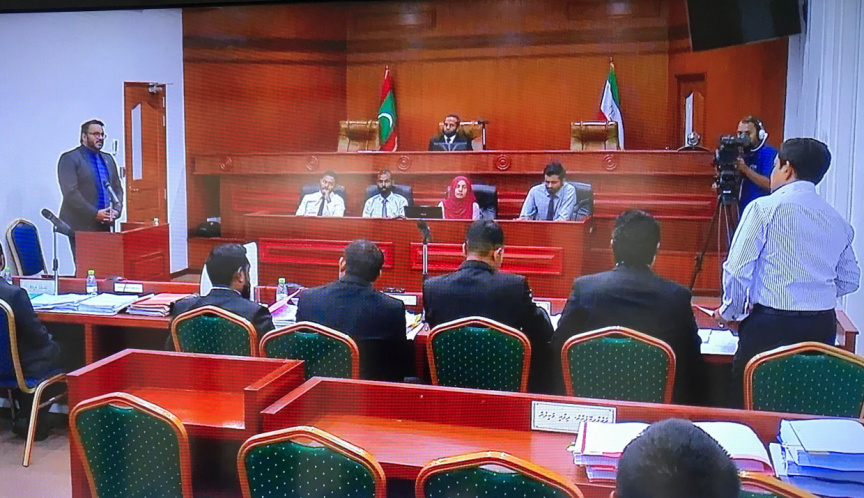 Former Maldivian President Abdulla Yameen Abdul Gayoom, who faces a conviction for money laundering in connection to the MMPRC embezzlement scandal, has come face-to-face with Ahmed Adeeb Abdul Gafoor – once his closest political ally – and now the State’s chief witness – for the first time in years.

Former VP Adeeb attended Criminal Court this Thursday to testify against Yameen in the money laundering case against him.

Adeeb was named as a witness to prove the State’s claim the USD 1 million wasn’t campaign donations, but money embezzled from MMPRC.

In response to a question by State prosecutor Mohamed Alim, Adeeb said that campaign donations to Progressive Party of Maldives (PPM) while he had been serving as the party’s deputy leader, came in sums of maximum MVR 100,000 – MVR 200,000. He said that PPM never received a campaign donation of USD 1 million.

Adeeb also pointed out that the USD 1 million was deposited to Yameen’s account in 2015 – a year during which no election was held.

He said that USD 1 million wasn’t a campaign donation, and that Yameen hadn’t requested him to raise campaign funds during the period of time in question.

“A lot of elections were held in 2013 and 2014. But there was no upcoming election in 2015. I therefore did not have any campaign funds to send to President Yameen at the time,” said Adeeb.

Adeeb said that Yameen never contacted him to collect campaign funds, but contacted him on multiple occasions regarding lease of islands and lagoons via MMPRC.

“I wasn’t contacted regarding campaign funds. But he would frequently contact me regarding MMPRC funds,” said Adeeb.

In response to an additional question by the State prosecution, Adeeb said that he carried out multiple communications with Yameen regarding the lease of islands and lagoons by MMPRC for tourism development, and that the money received from lease of the properties was processed as per Yameen’s instructions.

“I have even deposited cheques received by MMPRC and other State enterprises to private companies, withdrawn the money in cash, and handed it over to President Yameen. And I have carried the money to different parties at President Yameen’s instructions,” said Adeeb.

He said that Yameen, after the Finifenma speedboat explosion, pressured Adeeb to close the deal on lease of G. A. Vodamulaa and an additional lagoon, and expedite the collection of acquisition cost for the island and lagoon.

Adeeb said that Yameen had spearheaded the lease of islands and lagoons for tourism development.

Adeeb’s cross-examination was carried out personally by Yameen.

The first question he asked Adeeb was whether he harbored any ill-will towards him over the psychological damage he claimed to have suffered during his days under incarceration.

Adeeb who appeared calm during the face-to-face confrontation with Yameen, responded that he no longer harbored any ill-will, and had forgiven Yameen and others over his incarceration.

“I don’t know who exactly carried out the mistreatment, but I have forgiven those who subjected me to mistreatment, as well as President Yameen. I don’t harbor any grudge or resentment towards anyone,” said Adeeb.

Yameen then questioned Adeeb regarding the basis of his claim that Yameen was acquainted with those at SOF Private Limited, including Allam.

“President Yameen has had communications with them. And they even went to President Yameen’s residence with money. That’s what it is based on,” said Adeeb.

Yameen alleged the statement was a blatant lie.

Adeeb: “You know well it was funds from MMPRC.”

He then questioned Adeeb whether he carried out any illegal activity during his time as one of his administration’s Cabinet ministers.

Adeeb: “I acted in line with whatever was instructed of me by President Yameen. And to comment on this from a legal perspective – I am no attorney.”

Yameen: “Did President Yameen instruct you on everything? I am asking whether or not you engaged in any illegal activity. There are attorneys at the Tourism [Ministry] as well, isn’t it?”

Adeeb: “I will have to look into it. Nothing specific comes to mind.”

Yameen then referred to a statement by Adeeb to the police in which he said he was never given any instructions by Yameen regarding what to do with “campaign funds” deposited to his account.

He accused Adeeb of contradicting this earlier statement.

He said that the USD 1 million to Yameen’s account was deposited by SOF Private Limited at Yameen’s direct order.

Yameen then questioned over how something like that could have taken place.

Yameen declared the statement as false.

Yameen: “Are you admitting to committing such illegal transactions at President Yameen’s instruction?”

Yameen: “So you are admitting to it?”

Adeeb: “Yes. And you too, President Yameen.”

Adeeb also alleged that Yameen, prior to the deposit of the USD 1 million from lease of G. A. Vodamulaa to his account at Maldives Islamic Bank, spoke to the bank’s manager.

The statement sparked another verbal spar between the two allies.

Yameen: “Answer by question. How can you know I called Islamic Bank officials?”

Yameen: “So it was something SOF officials said right? What weight does it hold at this court room?”

The court, during this Thursday’s hearing, heard testimony from President of Anti-Corruption Commission (ACC), Mohamed Muawiz prior to Adeeb’s testimony. The court will hear testimony from MMPRC’s former MD Abdulla Ziyath after a short adjournment later this Thursday.