33 percent of council seats to be reserved for women 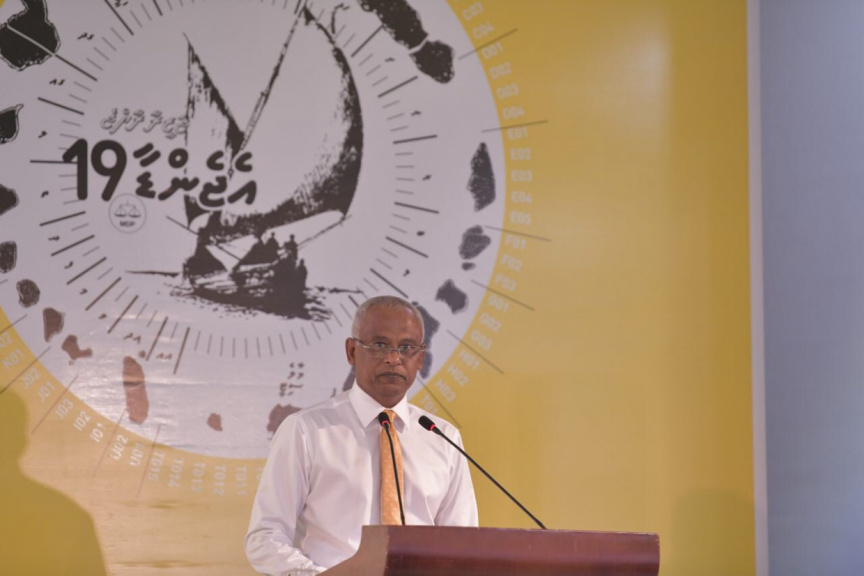 President Ibrahim Mohamed Solih has announced the decision to allocate 33 percent of seats at local councils to women.

The President made the announcement at the inauguration of the MDP Councilors’ Conference this Thursday.

President Solih announced that the government has completed drafting the legislative amendments necessary to improve the decentralized governance system.

He said that the amendments to Decentralization Act are aimed at empowering local councils both in terms of finance and resources, and reduce the dependency on the central government.

Highlighting the need to expand the role of women and youth in community and national development, President Solih said that women were a vital part of the decentralized governance system.

He said that women made up of half of the population, and that effective use of women’s opinions, education, and experience was necessary for sustainable development.

“Therefore, we must acknowledge that the word of women is equally valuable as that of men, increase political empowerment of women, we have, as part of the amendments to the decentralized governance system, decided to allocate 33 percent of island and city councils to women,” said Solih.

The President said that development, creation of employment opportunities and self-sustainability of local communities was vital to remedy the congestion and social issues affecting the capital, Male’ City.

“It is my opinion that one of the most important tasks is financial decentralization. And to establish the jurisdiction of local councils and establish a mechanism to create and retain income garnered from resources of local islands. This island nation country can only be developed through financial empowerment of local councils,” said Solih.

He said that the government has also proposed allocating five percent of State income to local councils, and enabling lease fees on properties under local council jurisdiction to go straight to the local councils.

“40 percent of lease income on properties such as land, islands, lagoons and reefs, and 100 percent of land lease income from residential islands under its jurisdiction will be released to councils. And fees taken by councils will go straight to the councils,” said Solih.