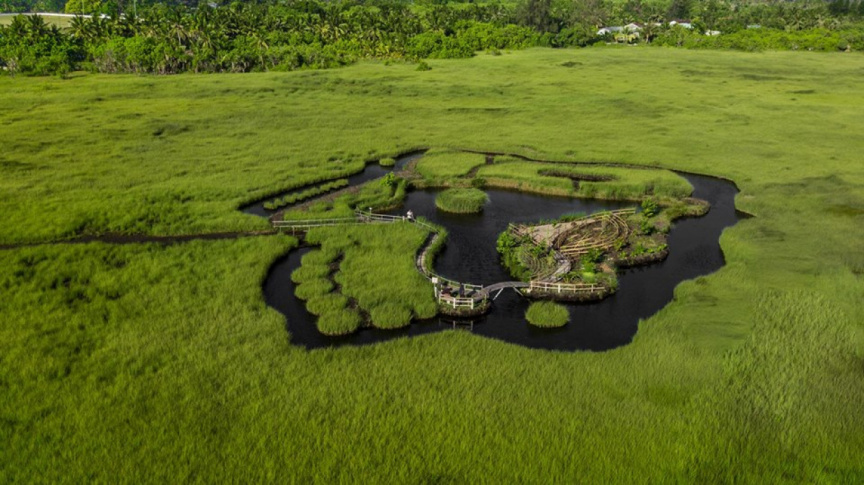 Mathikilhi area of Meedhoo in Addu atoll used to be abundant in freshwater lakes, the largest of these lakes being the "Fenfila Koaru" located in the center of the wetland.

Once a lake that snaked to different areas, most of this majestic body of water has turned into wetland nearly 20 years ago. Along with the Fenfila Koaru, most of the other smaller lakes in the area also turned into a wetland.

The common lake sedge that spread over the years in the area has left it covered like a lush green carpet. And the last lake that has been saved from being turned into a wetland is the famous Mathikilhi Eco Garden.

The location was conserved as an eco garden and named as the "Mathikilhi Eco Garden" due to the hard work and efforts of a few people in the community who took the initiative. The first task for these people was to clean the lake and free it from rubbish and remove the lake sedge and creating a walkway around the lake. This was all done carefully as not to damage the pristine environment.

This effort was first started up by Mohamed Salah from Dhoadhi, S.Meedhoo and Abdulla Zuhury from Fanaaru, S. Meedhoo. They were joined by Siyaadh Ahmed from Roashaneege also from S. Meedhoo. They were helped by others who found an interest in their work and contributed financially to their efforts. The work to beautify the location is still being carried out today even.

Zuhury who is one of the most important figures in this effort stated that they aimed to conserve the last remaining lake and create a breathtaking location for the island's community and visitors.

The benefits and happiness that is brought to the people from this location that encompasses a large area of the island are very much visible. Mathikilhi Eco Garden in Meedhoo has now become a place that gets hundreds of visitors during holidays and weekends. A special bond between the location and the youth community of the island, who have a unique love for the place from their interactions has also formed in recent years.

Fires are a constant occurrence in the Mathikilhi area during the warm season and the lake provides some relief from the fires to the area, underlying the importance of the lake and why it needs to be conserved at all costs.

Around 50 hectares of the area surrounding the Mathikilhi area is covered in lake sedge, giving off an area seemingly covered in green carpet. An amazing aspect of the area is that there are almost no trees in the area, leaving a large empty area filled with green lush vegetation. The area beyond the lake sedge is started by a line of large trees formed by coconut palms and screw-pine trees and so on.

Spending time in a garden situated in the middle of such a location can bring peace to the mind.

Mathikilhi Eco Garden is most famous due to the beauty of the area that is revealed from the astounding photographs taken of the place. Some people even find it hard to believe that the location is a part of Maldives due to the immense beauty and natural landscape of the location. It would be an amazing memory for anyone who visits Addu to take a trip to the Mathikilhi Eco Garden.