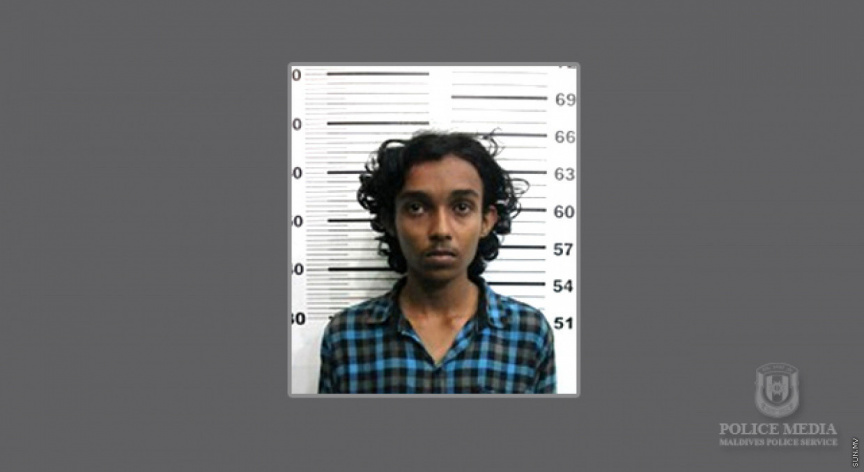 Hamdhoon Hamzath from L. Fonadhoo has entered a plea of not guilty in the charge against him for the murder of Ibrahim Agil from G. Dh. Faresmaathoda in 2018.

Agil,19, was stabbed to death near the Maldives Monetary Authority (MMA) headquarters on August 31, 2018.

Hamdhoon, who is currently serving an eight-month prison sentence for obstruction of a law enforcement officer, is charged with murder using a sharp-edged weapon.

He faces the death penalty if found guilty of the charge.

The charge against Hamdhoon was read at the first pretrial hearing in the case held at the Criminal Court this Wednesday.

According to the charge, Hamdhoon was present at the jetty area when Agil disembarked the speedboat, Skull Rider, on which he came to Male’ City from V. Felidhoo on the night on August 31, 2018. Hamdhoon assaulted Agil with a sharp-edged weapon, and Agil died from the injuries he sustained in the assault.

Hamdhoon pled not guilty to the charge.

Hamdhoon’s defense attorney, Ibrahim Rameez said the murder bore no connection to his client. He said that Hamdhoon had been in Vilimale’ at the time, and was even arrested by the police from Vilimale’.

He said the Hamdhoon’s alibi was brought to attention of the investigators.

State Prosecutor Mohamed Afrah, before announcing the State’s witnesses in the case, requested a protective order on the identities of some of the witnesses under Article 131 (a) of Criminal Procedure Code, citing grounds for witness tampering and destruction of evidence.

The request was granted by the judge.

The State prosecution has entered police officers who prepared the police video analysis report and the scene of crime report, and the officials from ADK Hospital who prepared Agil’s medico-legal report as expert witnesses.

The State has eye witnesses who place Hamdhoon at the jetty area, inside a van, and rush out of the van and into a private residence.

The State also has an eye witness who places Hamdhoon in a state of anxiety at the Vilimale’ Ferry Terminal after Agil was killed.

State Prosecutor Mohamed Afrah said the witnesses will prove Hamdhoon left for Vilimale’ after the murder.

Hamdhoon had gone to the ferry terminal on a motorcycle, and the video analysis report, which has been submitted along with other documental evidence will prove it was Hamdhoon who committed the murder, said the prosecutor.

The defense did not enter evidence at this Wednesday’s hearing put requested 10 days to enter witnesses to prove Hamdhoon’s alibi.

The prosecution objected that 10 days was too long a duration, and the judge granted the defense three days to enter evidence.

The judge established that the case may proceed. He also gave the defense 15 days to prepare pre-trial motions, and scheduled the next pretrial hearing – which will focus on arguments regarding the pre-trial motions - to 11 am on September 1.