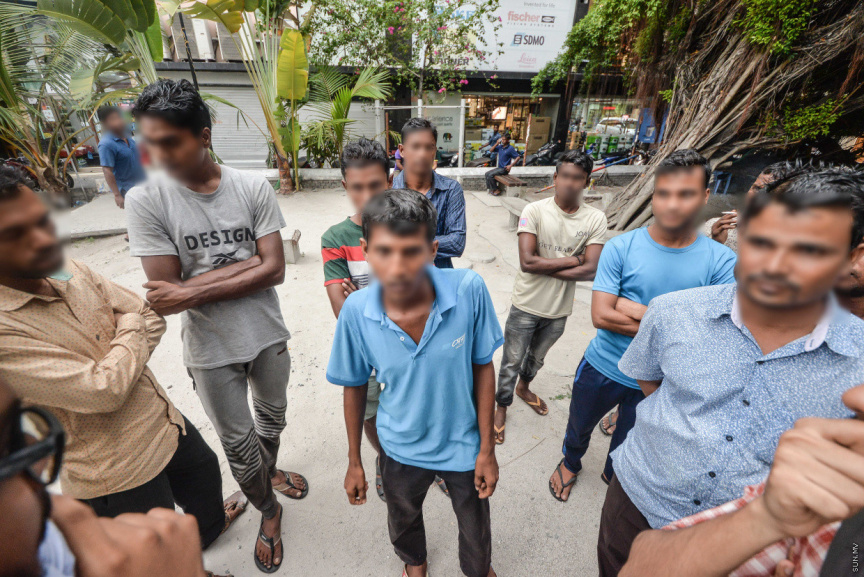 A group of migrant workers in Maldives. (Photo/Sun/Fayaz Moosa)

It has been estimated that 60,000 out of the 200,000 foreigners living and working in the Maldives are here illegally. With the collaboration of Maldivians and foreigners, over the years it has turned into an illegal business that is booming in the small island nation.

How does it work?

Most of the victims are recruited by an agency in their home country who are then sent to the Maldives under the quotas of a business or a company based in the Maldives. These recruits are usually paid around USD 175 to USD 200 in the Maldives. However, this is not the image portrayed to them by the recruitment agencies in their countries.

These victims are shown a decent lifestyle in the Maldives with good food and modern apartments with a salary of around USD 500 to USD 1000. They are also asked to pay up a massive amount of money to attain this dream lifestyle and are even required to keep a sizeable deposit, which when totaled can reach up to eye-watering numbers.

Most of the victims who fall for these schemes eventually end up mortgaging their homes for a loan or selling their lands to acquire the money needed for this fantasy lifestyle. They come to the Maldives with the vision of building up their lives back home.

What is the reality?

Reality hits these unsuspecting victims, only when they come to the Maldives and start working in the so-called “dream jobs” that were promised to them by the recruitment agencies back home. When they realize that they had been scammed, most of these victims resort to running away from their employers who brought them to the country legally and trying to find their own work to pay off the loans that they had taken.

The victims often find out that they can make more money than what their legal employers were paying by running away and finding their own jobs. Most of the time they survive due to the aid of a fellow countryman or a friend who feeds them finds them accommodation until they are capable of paying for themselves.

The criminals behind these elaborate scams ensure that their victims do not have many options by seizing their passports as soon as they enter the Maldives, and after their Visa cards expire, these victims turn into people without any identities.

The sale of quotas

There have always been complaints regarding the quotas that companies are allocated with. Allocating quotas without any limitations have resulted in more and more foreigners entering the country. There have also been allegations of corruption and collaboration between the officials in charge of allocating quotas and the agencies as well.

A former employee of the quota department of Maldives Immigration shared with “Sun” that there is an opulent business of selling quotas to the huge agencies operating in the Maldives per quota and that immigration officials pocket a lot of money through every quota. He also stated that some of these officials have become rich all of a sudden and gone as far as to establish their own businesses.

“For every quota, they gain around USD 50 – USD 100. They allocate quotas for at least 20-25 people at the same time, and this number can rise even higher.” The former employee who wished to remain anonymous explained.

Many have fallen prey to this nefarious act of human trafficking and the business has now spread throughout the country. A business where the sole aim of the participants is to take advantage of the indigent to deepen their own pockets. Such a wide ring of corruption can only be possible due to the incompetence of a lot of people.

This has turned into a million-dollar illegal business that is participated by agencies in the country and senior officials in the government who abuse their power at will. A nefarious and inhumane business that is still booming!