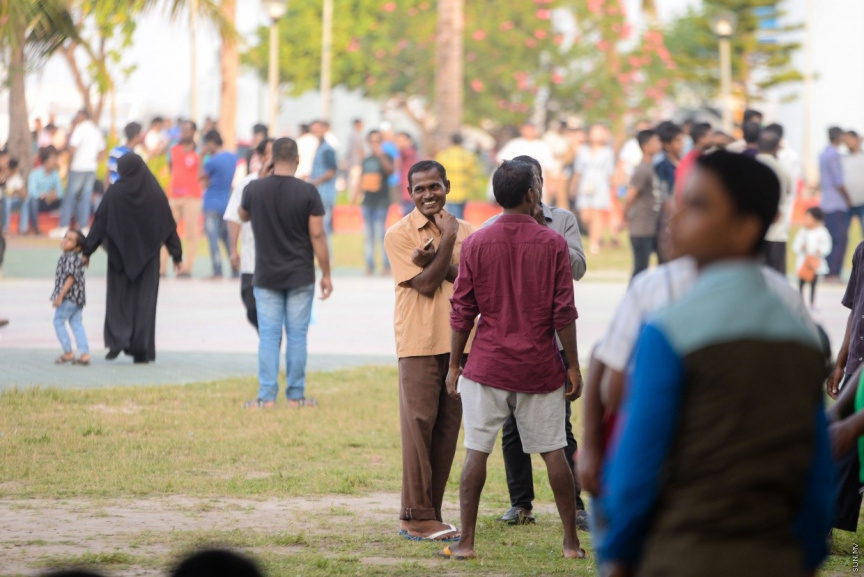 Migrant workers in Male' City gather at the Republic Square on a day-off. (File Photo/Sun/Mohamed Afrah)

The Committee on National Security and Foreign Relations of the Parliament’s meeting to look into the issue of illegal migrants is being held behind closed doors.

The committee meeting, during which senior officials from three State institutions are scheduled to be questioned, began at 10 am this Wednesday.

The press has been barred from access to the meeting.

THE THREE STATE INSTITUTIONS TO BE QUESTIONED:

A petition signed by 2,000 Maldivian citizens asking for a remedy to the issue of illegal migrants in Maldives was submitted to the Parliament last June. The Petition Committee of the Parliament, at the time, deemed the petition did not fit the criteria, and asked the petitioners to re-submit the petition following revisions.

The petition, the first public petition to be filed with the current parliamentary assembly, says the existence of illegal migrants in Maldives is a threat to national security. It asks the Parliament to resolve the issue, and facilitate more opportunities to Maldivian citizens in the labor market. It also calls for the creation of an institution dedicated to resolving such issues.

It is unclear if the petition was re-submitted to the Parliament.

At a press conference on June 30, Economic Development Minister Fayyaz Ismail announced that Maldives is estimated to have a migrant population of 250,000 – a significant percentage of who are illegal migrants.