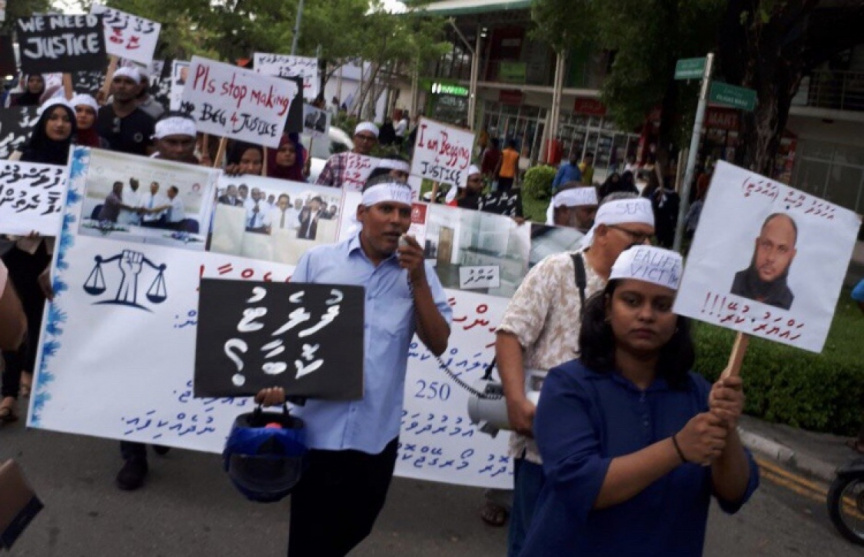 File photo of a rally held in Hulhumale' to protest against Sealife Global.

The housing fraud class action lawsuit against Sealife Global has been settled out of court with Housing Development Corporation (HDC) agreeing to refund the tenants who made down payments for Sealife’s SeaLife Complex using advance payments made by Sealife to HDC.

‘Sun’ is able to confirm HDC signed the settlement agreement with the plaintiffs’ last Monday, July 15.

According to the settlement agreement, HDC will take responsibility for refunds to the tenants by using the advance payments made by Sealife to HDC. The tenants who incurred losses due to the down payments will also be prioritized in awarding housing under social housing schemes.

Managing Director of HDC, Ahmed Suhail confirmed to ‘Sun’ last Monday evening that the lawsuit has been settled out of court. And that the corporation will disclose details of the settlement agreement at a later date.

Sealife announced its 3,000-apartment housing project, the SeaLife Complex in Hulhumale’ in 2015.

280 tenants paid down payments of MVR 50,000 (some more than MVR 50,000). But the SeaLife Complex was never built and the tenants never reimbursed for their down payments.

The cumulative total of the down payments collected by SeaLife is estimated to be upwards of MVR 14 million.

The case is under investigation by the Economic Crime Department of Maldives Police Service and the Anti-Corruption Commission (ACC).

An Interpol has issued red notice has been issued against Ahmed Moosa Mohamed (Ammaty), the Managing Director of Sealife Global, who is presumed to have fled to Sri Lanka.

Speaking at a press conference this July, President Ibrahim Mohamed Solih said the government was in the middle of negotiations to settle the case out of court.

He said Sealife had proposed reimbursing the down payments using the advance payment made to HDC for the project, and relaunching the project.

“The proposal is – Sealife has paid HDC millions of dollars in advance payments. They have asked that tenants will be reimbursed using that money, and they be allowed to resume the project,” said Solih.

HDC’s MD Suhail, in an earlier interview to ‘Sun’, declined to disclose details of the negotiations, but confirmed negotiation sessions were held on multiple occasions.

Sealife was issued land for the housing project in Hulhumale’ as compensation for annulment of the contract to build luxury villas in V. Thinadhoo signed during former President Mohamed Nasheed’s presidency. The project was launched with permission from the Economic Council at the President’s Office during Yameen’s presidency in 2014.

Anti-Corruption Commission (ACC) is currently investigating a USD 15,000 deposit made by Sealife to Yameen’s account in 2014 as a possible kickback for award of the project.

Sealife Global’s parent company, Sealife Maldives, denies the accusation. The company reports the USD 15,000 has nothing to do with the housing project, but is repayment for a personal business transaction between Yameen and Ammaty.

Additional parking area opened at VIA