Death of migrant construction worker - how it happened 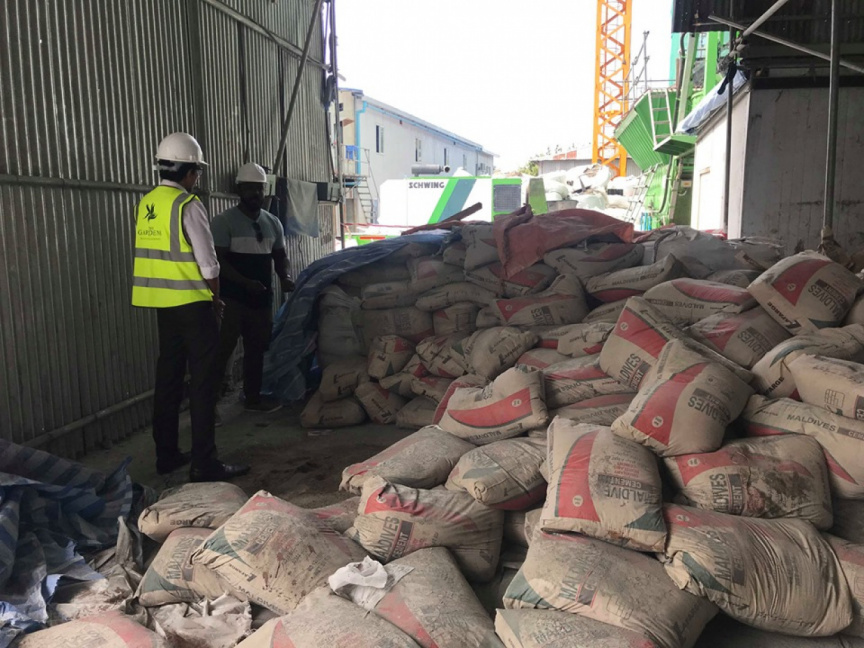 The location of the fatal construction accident in Hulhumale' on July 10, 2019. (Photo/Sun/Mohamed Muzain Nazim)

Maldives Police Service, on Wednesday, reported the death of a migrant worker hit by a falling cement bag at a luxury apartment complex under construction by Jaah Investment Private Limited in Hulhumale’. However, the agency, this Thursday, revised its earlier statement and reported the worker was killed after he got trampled under a jumbo bag packed with cement bags. The conflicting accounts of how the construction accident took place created confusion and questions over the safety standards at the construction site.

‘Sun’ visited the construction site this Thursday and met with the Operations Director at Jaah Investment, Mohamed Shamoon. He clarified where and how the fatal construction accident took place.

The accident took place last Wednesday evening while the worker, a 24-year-old man from Bangladesh, along with his colleagues, were mixing concrete. There were several other migrant construction workers present at the time all involved in their own tasks. One worker was removing cement bags from the jumbo bag and handing it another worker, who in turn was delivering it to the worker who was pouring the cement into the mixer. The worker who died had been the one removing the cement bags from the jumbo bag.

According to Shamoon, the worker died attempting to remove a cement bag from one of the piles. The worker crouched down and tugged at one of the cement bags. The jumbo bag tipped, and fell right on his head. He was trampled under the heap and broke his neck. The hardhat he was wearing provided little protection.

“They [the workers] started shouting. The supervisor thought it was a fight. They removed the bags off his body, put him on a mattress and onto a pickup within five minutes. He was immediately taken to the hospital on the pickup,” said Shamoon. “He was bleeding from his mouth and nose when they removed the bags.”

Shamoon expressed concern over earlier reports which implied a cement bag fell from the top of the construction site. He said the reports also created public panic.

Shamoon does not believe the accident is a result of inadequate safety standards or negligence.

Meanwhile, Managing Director of Housing Development Corporation (HDC), Suhail Ahmed also reported to ‘Sun’ that he does not believe the accident is a result of negligence by the contractor.

Suhail said the HDC found no safety violations at the site.

A LIFT DID NOT FALL AT THE CONSTRUCTION SITE

The press carried reports of another accident at the construction site less than a week ago, involving a lift at the site falling and injuring a migrant construction worker who was inside the lift. Speaking to ‘Sun’ this Thursday, Shamoon said the reports were false.

According to Shamoon, it wasn’t a lift which fell, but a winch used to carry construction material to the upper floors. It is not used to carry people.

The remote-control winch which fell from the seventh floor is operated by a designated worker. The winch has a maximum load limit.

The worker injured on Saturday, July 6, had climbed onto the winch which was already loaded with construction material. The winch fell, along with the worker, because it surpassed the maximum load limit.

Shamoon said the worker dislocated a disc on his spine as a result of the fall.

He has undergone surgery and is recovering well, said Shamoon.

“It was a controlled fall, but it hit the ground hard, nonetheless. He would have sustained far worse injuries if the fall hadn’t been controlled,” said Shamoon.

The victims of both construction accidents were two workers hired by the company for the site one month ago.

Both construction accidents are under investigation by the police. Officials from the President’s Office also visited the site for an inspection following the death of the worker last Wednesday.

Jaah Investment has announced it will provide financial assistance to transport the body of the worker to his family in Bangladesh.