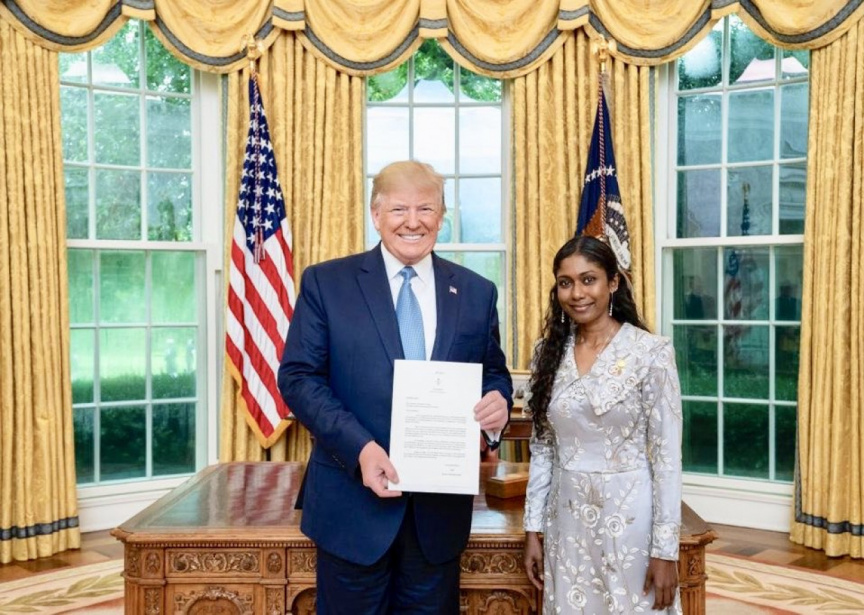 Maldivian ambassador to the US, Thilmeeza Hussain (R) presents her credentials to US President Donald Trump in a ceremony held at the White House on July 8, 2019. (Photo/Twitter/Thilmeeza Hussain)

The Maldivian ambassador to US, Thilmeeza Hussain has presented her letter of credentials to US President Donald Trump.

Thilmeeza presented her credentials in a ceremony held at the White House last Monday.

In a tweet following the ceremony, Thilmeeza thanked the US government for its support in strengthening the democracy of Maldives, and reaffirming its ties with Maldives in recent months.

It is an honour to represent Prez @ibusolih’s govt as I presented my Credentials to Prez Trump @realDonaldTrump at the White House.
I thank the US for the support given in strengthening our democracy and reaffirming the close ties in the recent months @WhiteHouse @MDVForeign pic.twitter.com/jWtasR0iCh

She has a Master’s of Science in Business Management from the Colorado Technical University of US, had been serving as Adjunct Professor of Sustainability at Ramapo College of New Jersey and as Co-Chair of the Socially and Economically Just Adaptation and Mitigation Team of the United States Climate Action Network prior to her appointment.

She also has experience in the Maldivian foreign service, having served as Deputy Permanent Representative of the Permanent Mission of the Republic of Maldives to the United Nations, and as Non-Residential Deputy Maldivian Ambassador to the US and Canada.

US pledges USD 2M in economic support to Maldives

US commends Maldives for progress in press freedom