Multiple financial agreements to be sealed at Maldives Partnership Forum 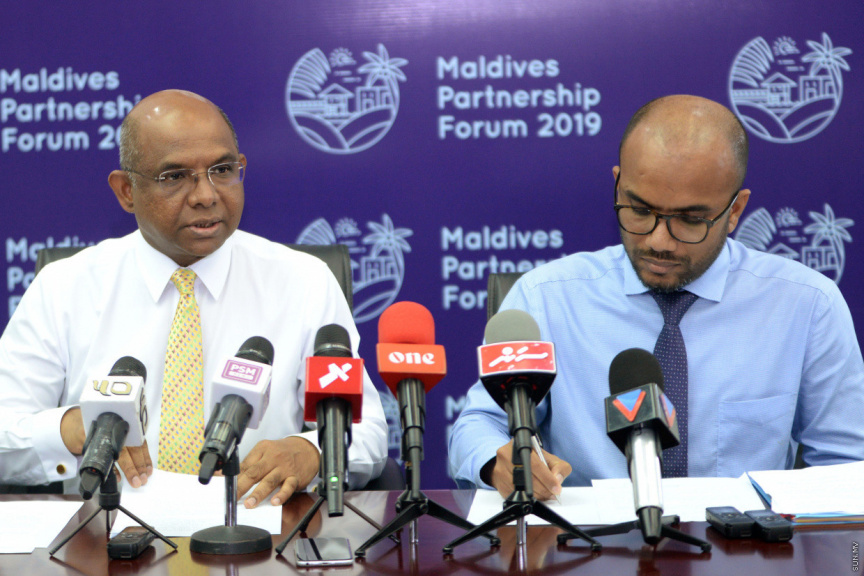 (From L-R) Minister of Foreign Affairs, Abdulla Shahid and Minister of Finance, Ibrahim Ameer speak during a press conference regarding the 4th Maldives Partnership Forum on June 16, 2019. (Photo/Sun/Ahmed Awshan Ilyas)

Multiple financial agreements between the Maldivian administration and foreign investors will be signed during the 4th Maldives Partnership Forum which will begin on Monday, says Foreign Minister Abdulla Shahid.

The two-day Maldives Partnership Forum is scheduled to begin at Kurumba Maldives on Monday.

Speaking during a press conference regarding the forum this Sunday, Foreign Minister Abdulla Shahid said several key financial agreements will be signed by the end of the forum.

“The agreement on the 500 million Japanese Yen (USD 4.6 million) by the Japanese administration will be signed. It is to assist socioeconomic development of Maldives. The US administration has decided to increase the USD 3 million development objective assistance grant to USD 11 million. Georgia and Maldives will sign a bilateral agreement. And the two countries will sign an agreement on increasing cooperation in tourism,” said Shahid.

He added that the Maldivian administration will also be signing a 5 million Euro assistance by the European Union research on increase in greenhouse emissions in Maldives, and a USD 10 million financial assistance agreement with the Asian Development Bank (ADB).

Shahid said that the administration expects additional agreements to be signed by the end of the forum.

4 Ambassadors their letter of credence to President