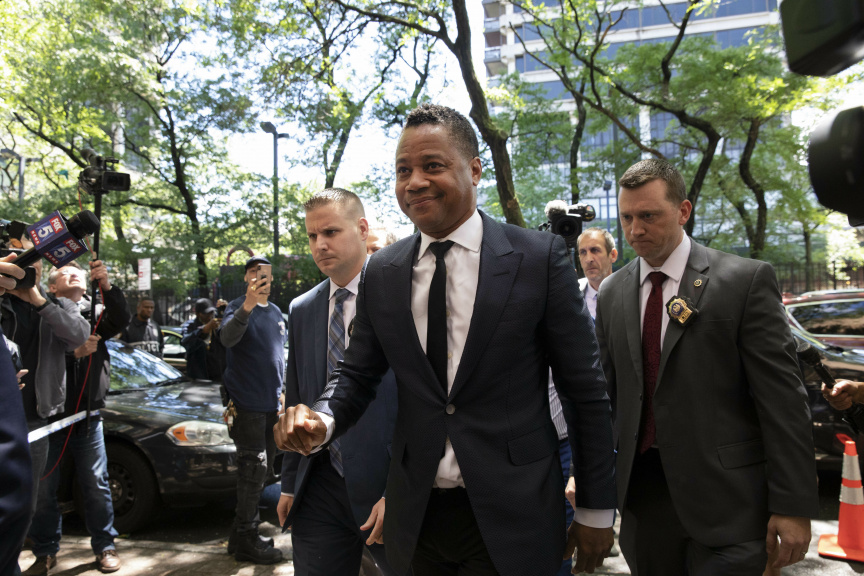 NEW YORK (AP) — Cuba Gooding Jr. turned himself in and was arrested Thursday on charges he groped a woman in an encounter at a New York City night spot that appears to have been caught on video.

The 51-year-old Oscar-winning star of "Jerry Maguire" denies the allegations and pleaded not guilty to forcible touching and sexual abuse charges at a night court arraignment.

He was released on his own recognizance after about six hours in police custody.

Gooding did not discuss his case as he left court, instead offering well wishes to David Ortiz, the Boston Red Sox star hospitalized after he was shot Sunday in the Dominican Republic.

"Get well, Big Papi," Gooding said while passing a phalanx of cameras and reporters in the courthouse lobby.

Before getting into a car outside, he added: "It's been a long day."

A 29-year-old woman told police that Gooding place his hand on her breast and squeezed it without her consent Sunday night at Magic Hour Rooftop Bar & Lounge. The woman said she believed Gooding was intoxicated.

Video obtained by TMZ that the website says is from inside the bar on the night in question appears to show Gooding putting his hand on or near a woman's leg and breast as they sit on a couch with another woman between them.

Gooding is then seen pulling the woman's hand to his lips, as if to kiss it, and leaning toward her before another man steps up and talks with them.

The video could be key evidence for prosecutors, but Gooding's lawyer said the footage showed "not the slightest scintilla of inappropriate conduct" and will exonerate him.

"Mr. Gooding has not acted inappropriately in any shape or form," lawyer Mark Heller said.

"Nothing in the video could even be considered ambiguous, and I frankly am shocked and horrified that this case is being prosecuted," he added.

Gooding, in a dark blue suit, smiled and waved as he walked into a police station Thursday afternoon to meet with special victims investigators. Inside, they took his fingerprints and a mug shot before leading him out in handcuffs.

Later, Gooding sat on a wooden bench in the front row of an austere courtroom, his hands cuffed behind his back and his face turned serious as he waited for his case to be called. As a detective uncuffed him, he uncurled his hands and shook them out.

A conviction could put Gooding behind bars for up to a year. He is due back in court June 26.

Heller said he doubted the accuser would show up for court hearings and suggested that prosecutors should charge her with perjury if she testified in court and her allegations were contradicted by video.

The NYPD has not identified the accuser.

Heller said that after he and his staff reviewed the two-hour security video, he was hesitant to let Gooding surrender and thought police and prosecutors would drop the case.

"I am highly confident that he will be totally exonerated," Heller said.

Heller also disputed allegations in media reports from a second woman said to have come forward in recent days and told police that Gooding grabbed her buttocks at a New York City restaurant in 2008.

Gooding was not charged on that allegation.

"There is no pattern of conduct," Heller said in an interview Thursday. "It is not uncommon for people to come out of the woodwork when these things happen."

Gooding was involved in another bar-related episode in New Orleans in 2012. A bartender said that the actor was agitated by patrons who wanted photos with him and that he pushed her when she asked him to leave.

An arrest warrant was issued, but the bartender declined to press charges.

As for Sunday night, Gooding told TMZ that he was at Magic Hour partying with friends but didn't touch anyone. He said there's a video that shows "what really happened."

"I trust the system and will let the process speak for itself," Gooding said in the TMZ interview.

The bar, on the roof of the Moxy Hotel south of Times Square, features mini golf and sweeping views of the Empire State Building and other Big Apple landmarks.

Gooding, a Bronx native, rose to fame after starring in "Boyz N the Hood" in 1991.

Six years later, he won an Oscar for his role as NFL player in "Jerry Maguire." His character's signature line, "Show me the money," became a catchphrase.

Gooding was nominated for an Emmy Award last year for playing the title character in the FX series "The People v. O.J. Simpson." He recently appeared on Broadway and London's West End as lawyer Billy Flynn in "Chicago."