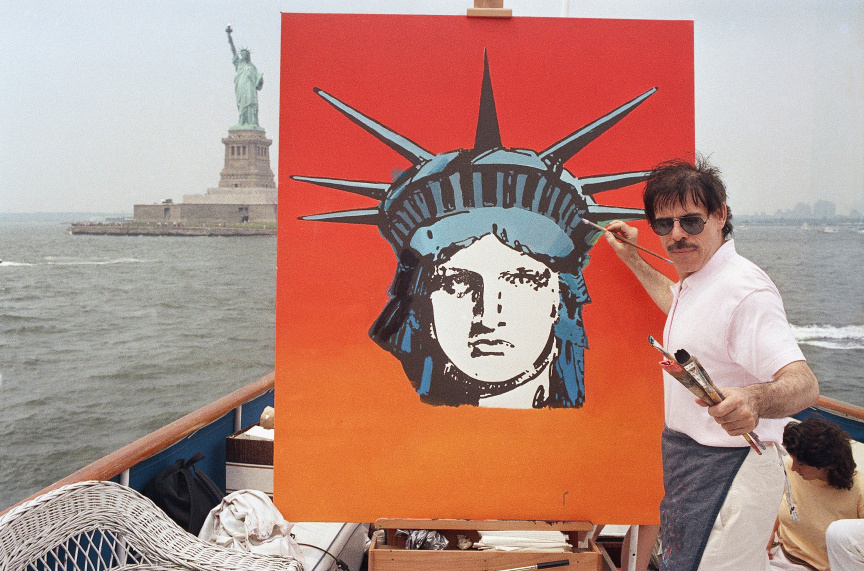 CORRECTS MARY MAX'S AGE TO 52, NOT 53 - FILE - In this July 4, 1987, file photo, artist Peter Max works on a painting of the Statue of Liberty aboard a boat in New York Harbor, as part of the Fourth of July festivities New York. Authorities say Mary Max, 52, the wife of the artist Peter Max, was found dead Sunday, June 9, 2019, in New York, of a suspected suicide amid a family fight over her husband’s work. Her death comes two weeks after The New York Times published a story detailing legal battles over the work of Peter Max, a prolific creator of colorful, psychedelic art who is now living with dementia at age 81. (AP Photo/David Bookstaver, File)

NEW YORK (AP) — The wife of the artist Peter Max has died in a suspected suicide amid a family fight over her husband's work and allegations that he was being exploited.

The New York Police Department said Mary Max, 52, was found dead Sunday in her apartment by her husband's health aide. She had been married since 1997 to Peter Max, whose psychedelic, colorful artworks have been celebrated since the 1960s.

Her attorney, John Markham, said in an interview Tuesday that in the hours before she died, Max left a lengthy voicemail with a friend in London.

"She wanted to leave a message with certain instructions what to do with matters important to her and she wanted to say her goodbyes" to her husband, her brother and mother, and close friends, Markham said.

The New York Times published a story two weeks ago detailing legal battles over the work of Peter Max, a prolific creator of art now living with dementia at age 81.

Max's work has been exhibited at museums, been the basis of popular wall posters, promoted major sporting events, graced the covers of rock records and appeared on a U.S. postage stamp.

In recent years, though, some family members claimed in lawsuits and interviews that Peter Max was being mistreated and asked to sign his name to work created by a team of other artists. Some of that art was sold on a cruise line and in galleries around the country, raking in millions of dollars.

Mary Max figured prominently in the disputes, telling a court that one of Max's sons from a previous marriage, Adam Max, had improperly taken custody of him and kept him from other relatives.

Adam Max countered with his own allegations, accusing Mary Max of being abusive toward her husband — allegations she denied.

A court returned Peter Max to his wife's care, but the fights over his art have continued.

Markham said his client "wanted a new approach to an analysis of her rights."

The attorney said there's been a recent revival of interest in Peter Max works, "and there's a lot of squabbling over it."