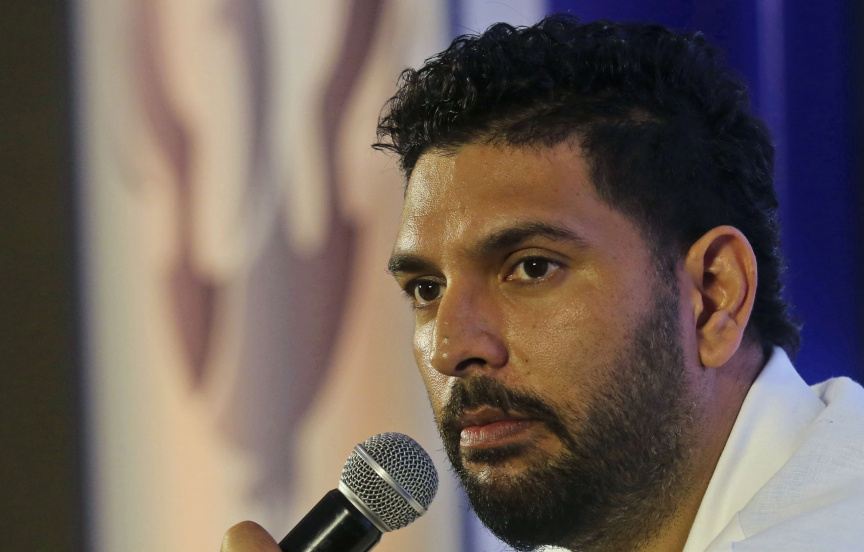 MUMBAI, India (AP) — India all-rounder Yuvraj Singh, who was voted player of the tournament at the 2011 World Cup, has retired from cricket.

"A very difficult and at the same time a very beautiful moment for me," Yuvraj told a news conference in Mumbai on Monday.

His highlight was the 2011 World Cup on home soil, where he scored 362 runs including a centuries and four half centuries and took 15 wickets with his left-arm spin to help India win the title. He was the first player to score more than 300 runs and take 15 wickets in one edition of the quadrennial tournament.

"After 25 years, in and around 22 yards, and after almost 17 years of international cricket on and off, I have decided to move on," Yuvraj said. "I am extremely lucky to play 400-plus games for India."

"It was a love-hate relationship with the sport, in retrospect," he said. "I don't think I hated the game, because the love I have for it today, which will remain a constant till the end of (my) life. I can't really express in words what is that feeling."

Yuvraj underwent treatment for cancer in 2012 and was out of the game for a prolonged period. He played returned to play 30 more ODIs mostly in 2013 and 2017. His game for India was a one-dayer against West Indies in 2017.

He made the retirement announcement at home hours after India beat defending champion Australia in a World Cup group game at the Oval in South London.

The International Cricket Council issued a statement congratulating Yuvraj for being a role model on and off the field.

"He was one of those players who could raise his game in crunch situations and excelled at ICC events time after time," ICC chief executive Manu Sawhney. "He has been an inspiration both on and off the field and given so much joy to millions of fans the world over.

"I have no doubt that Yuvraj is a hero not just in the cricketing world but outside of it, too."

Yuvraj made his international debut in October 2000 but really hit the headlines with his powerful hitting in 2007 World Twenty20, when India won the inaugural tournament.

He hit England's Stuart Broad for six sixes in an over and then scored another brisk 70 against Australia in the semifinals.

"This game taught me how to fight, how to fall, to dust myself off and get up again and move forward," Yuvraj said, reflecting on his career and his illness. "I have failed more times than I have succeeded, but I never gave up, and will never give up, till my last breath, and that's what cricket has taught me. I gave my blood and sweat to the game once I got on to it, especially when it came to representing my country."

Yuvraj described his memorable run at the 2011 World Cup as "like touching the sky" but getting diagnosed with the rare cancer was like "falling down at light speed and hitting the ground hard."

"All this happened so quickly, and that too when I was @ the peak of my career," he said. "But in that moment, everyone to whom I mattered, stood together for me — my fans, my friends, my family."

Spain beats Sweden to stay ahead in Euro 2020 qualifier