Spain beats Sweden to stay ahead in Euro 2020 qualifying 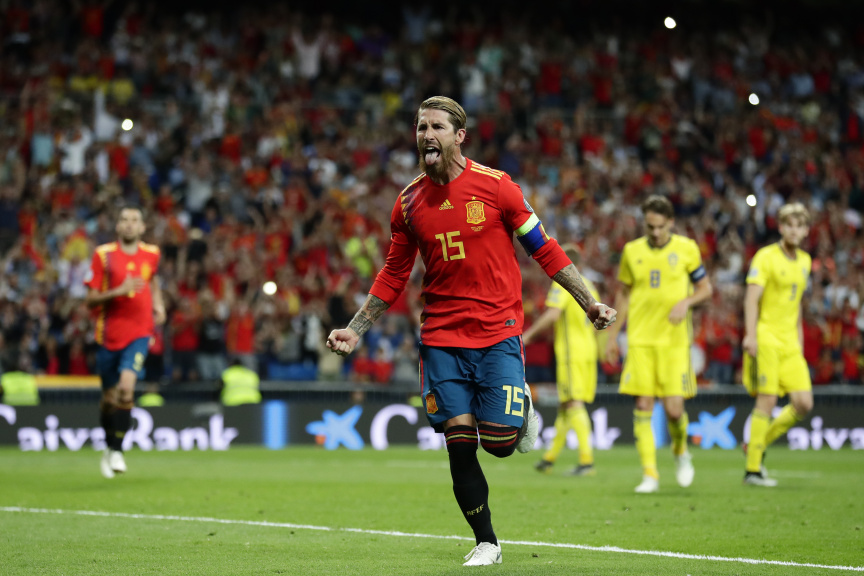 Spain's Sergio Ramos celebrates after scoring the opening goal with a penalty during the Euro 2020 Group F qualifying soccer match between Spain and Sweden at the Santiago Bernabeu stadium in Madrid, Monday June 10, 2019. (AP Photo/Manu Fernandez)

MADRID (AP) — Sergio Ramos extended his scoring streak and helped Spain defeat Sweden 3-0 to remain leader of its qualifying group for the 2020 European Championship on Monday.

"It's a great result in a difficult match against a tough opponent," Ramos said. "We've taken an important step toward making it to the European Championship."

Ramos reached 20 goals with the national team, with seven coming since last year's World Cup. He is the national team's top scorer under coach Luis Enrique, who again was absent for personal reasons.

Ramos also opened the scoring in a 4-1 win at the Faeroe Islands last week, when the central defender became the player with the most wins with a national team, surpassing the record of 121 previously held by fellow Spaniard Iker Casillas.

The captain was honored for the record before the match.

Spain scored another penalty in the 85th after Morata was brought down by Filip Helander inside the area. Ramos handed the ball to Morata, who calmly converted from the spot.

"It was a great attitude by Ramos to let me take the penalty," Morata said. "I hadn't even asked for it."

Oyarzabal closed the scoring with a shot from inside the area in the 87th for his first international goal.

Spain controlled the match at the Bernabeu, creating most of the significant scoring chances.

Rodrigo had a goal disallowed for offside in the first half, and Francisco "Isco" Alarcon came close with an uncontested shot from inside the area that just missed early in the second half.

Sweden lost forward Viktor Claesson because of an injury in the first half.

For the third straight game, Luis Enrique was absent and the team was led by assistant coach Robert Moreno.

"They only had one attempt on goal, so we are happy with the result and with the performance," Moreno said.

Luis Enrique has been working remotely from his home in Barcelona, receiving video feeds of practices and meeting his assistants virtually.

There is no timetable for the coach's return. Local media reports said his absence is due to a problem with a family member.

Qualifying will resume in September, with Spain playing at Romania, and Sweden visiting the Faeroe Islands.