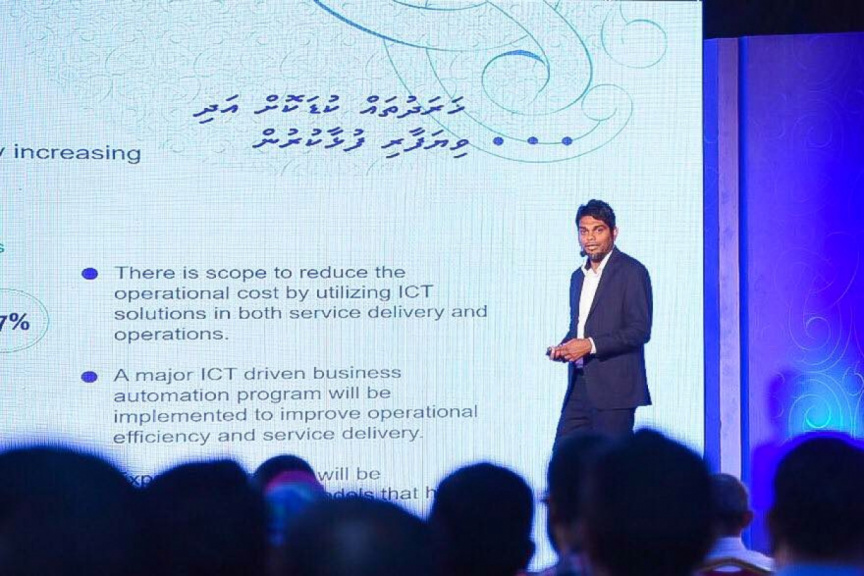 Managing Director of State Trading Organisation Hussain Amru Mohamed Rashad giving a presentation on the financial status of the company during the 2018, Annual General Meeting held at Dharubaaruge, Rannabadeyri Maalam on May 16, 2019.

State Trading Organization (STO) has stated that the losses of the hotel in Hulhumale’ and the losses of Maldives Industrial Fisheries Company, MIFCO affects the whole STO group.

During the 2018, Annual General Meeting of STO held at Dharubaaruge, Rannabadeyri Maalam last Thursday night, managing Director of STO Hussain Amru Mohamed Rashad stated that MIFCO has faced a loss of MVR 839 million since it was brought under STO. He stated that MIFCO faced a loss of MVR 199 million last year alone and that STO would do it’s best to make MIFCO a profiting company.

Speaking about the hotel, STO is building in Hulhumale’ Amru stated that the project was inaugurated on 2007, it has been 12 years since and the company is still facing losses because of the hotel.

“The hotel project was signed with Housing Development Corporation for a period of 25 years. The deadline will be 2033. According to the agreement of 2007, USD 15000 per bed has to be paid every year. A while later, the amount was changed to USD 2400 per bed each year,” Amru stated.

Two other agreement were signed with the Carlson Group to give consultation about the work of the hotel and to handover the management of the hotel to the group.

Amru highlighted that a number of dates were given over a number of times to construct the STO Hotel.

Amru stated that STO has to pay MVR 5 million to HDC. He stated that even though the actual cost for the hotel was USD 60 million, loans were taken to hurry the progress of the construction. Amru noted that President’s Office sent a letter stating to STO should not venture into the hotel business after 55 percent of the construction work was done. He said that they stopped the work of the hotel with that letter and they were ordered to sell the hotel in 2015 by the President’s Office.

“We have spent USD 42.9 million dollars on that hotel, to this day,” stated Amru.

Amir also shared that after the hotel was put to sale, ten investors showed interest and five of them were shortlisted. He said that the investors start to hesitate once the investors are detailed about the status of the hotel. He also said that since the hotel is based on an old concept, new and developed changes have to be brought to the Hotel.

Amru stated that no investor wants to buy the hotel because of the agreement signed with the Carlson Group.

STO states that the hotel was designed to be a five-star hotel with a total of 250 rooms. The hotel would include 195 standard king guestrooms, 24 standard twin rooms, 27 deluxe rooms and five studio rooms. Additionally, the hotel would also have an all-day dining restaurant, at least one specialty restaurant, a ball room and even a shopping mall.

The hotel is also designed with a 40-meter pool, sea sport facilities, parking area, spa and a gym.