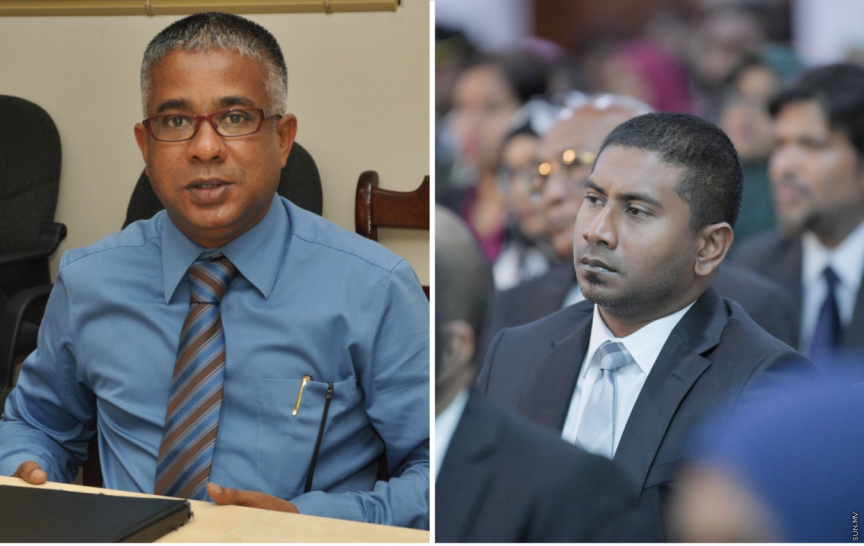 Combined file photos of (from L-R) Minister of State for National Planning and Infrastructure, Akram Kamaaluddin and Minister of Youth, Sports and Community Empowerment, Ahmed Mahloof.

The State has lifted its suspension on Minister of Youth, Sports and Community Empowerment, Ahmed Mahloof and Minister of State for National Planning and Infrastructure, Akram Kamaaluddin, clearing them of wrongdoing regarding the dollar transfer made to their bank accounts from SOF Private Limited - the company embroiled in the Maldives Marketing and Public Relations Corporation (MMPRC) embezzlement and money laundering case.

ACC, in its investigative report on the MMPRC case, flagged all bank deposits and bank transfers made from SOF Private Limited.

ACC’s investigative report of the MMPRC case was publicly released on February 14, and Mahloof and Akram were placed on suspension the very same day.

ACC had cleared Mahloof and ruled his transaction with SOF Private Limited as a legitimate business transaction on March 14. And the President’s Office had previously announced a decision regarding lifting the suspension on him would be made after Maldives Police Service completes its own probe into the transaction.

When asked whether the State lifted the suspension on Mahloof after both the ACC and the MPS cleared him of wrongdoing, Hood replied that he wasn’t privy to the MPS’s investigation into the case, but that President Ibrahim Mohamed Solih made the decision to lift the suspension based on certain assurances as to Mahloof’s innocence.

“ACC has cleared him. The President made his decision based on all this,” said Hood.

“I am not privy to details regarding the investigation. But it is based on certain assurances,” he added.

Mahloof, in a tweet this Tuesday thanking the President for his decision to lift the suspension on him, said that the decision was made based on the assurance of both the ACC and MPS that he was innocent of any wrongdoing.

Hearings in Mahloof's bribery case to begin on Jan 19

No action against Sports Minister despite charge

BML: Deductions are for what is owed to the businesses